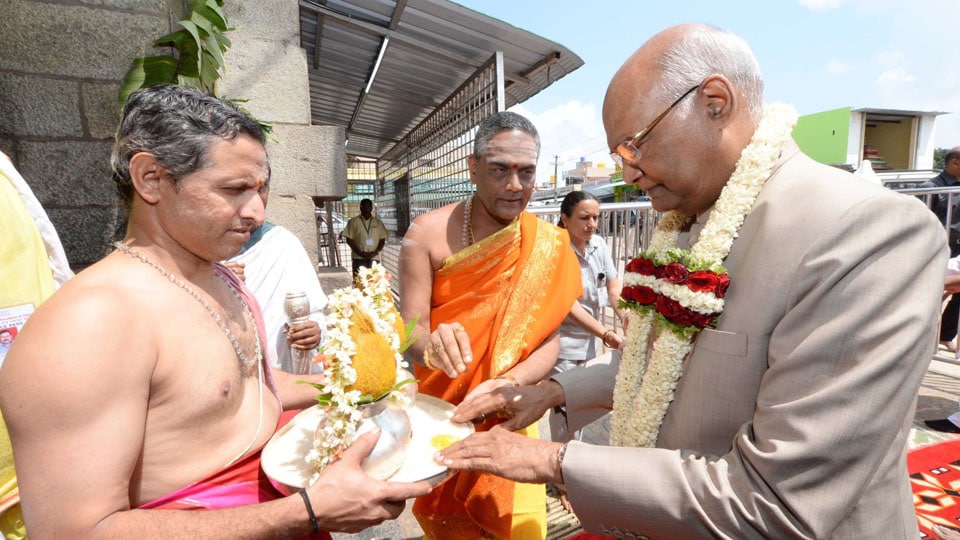 Mysuru / Nanjangud: After a packed schedule at Mysore Palace yesterday where he inaugurated the year-long birth centenary celebrations of Jayachamaraja Wadiyar, President Ram Nath Kovind, accompanied by his wife Savitha Kovind, visited the famed Srikanteshwara Temple in Nanjangud and Chamundeshwari Temple atop Chamundi Hill this morning.

The couple was accorded ‘Poorna Kumbha’ welcome at the Temple Town of Nanjangud. The President, after an overnight stay at the Government Guest House in Mysuru, arrived in Nanjangud at about 9.30 am. The cavalcade moved inside the Srikanteshwara Temple complex where the First Citizen of India and the First Lady of India offered prayers to the presiding deity — also called Nanjundeshwara — under the guidance of priests Neelakanta Dikshit, Vishwanath Dixit, Nagachandra Dikshit and others.

Ram Nath Kovind and wife Savitha Kovind went around the entire temple premises and worshipped at Ganapathi, Parvathi and Narayanaswamy temples. They spent about 45 minutes in the temple and left for Chamundi Hill by road.

Earlier, Nanjangud MLA B. Harshavardhan presented a book titled ‘The Radical in Ambedkar — Critical Reflection’ to the President when he entered the welcome room (also called Green Room) near the entry door of the temple. The MLA, after greeting the President and his wife, told him about his family’s political background and that of the political journey of his father-in-law V. Sreenivasa Prasad who is the MP from Chamarajanagar.

On account of the President’s visit, the Srikanteshwara Temple was shut for public from 6 am itself which resulted in long queues of devotees lining up before the temple for darshan. The temple was opened for devotees a few minutes after the President’s convoy left.

After leaving Nanjangud by road, President Ram Nath Kovind and his wife Savita Kovind arrived at Chamundi Hill at about 10.40 am, when the President couple was accorded ‘Poorna Kumbha’ welcome. The President was adorned with a Mysuru Peta and a shawl.

The President offered prayers to Goddess Chamundeshwari under the guidance of the temple priests led by Chief Priest Dr. Shashishekar Dikshit. Due to the President’s visit, the entry of devotees was banned for two hours from 9.45 to 11.45 am. The temple was reopened for devotees after the           President left Chamundi Hill at about 11.30 am

The President, who left Chamundi Hill at 11.30 am, returned to Government Guest House in Nazarbad. The President will lay the foundation stone for the new Global Campus of JSS Academy of Higher Education and Research (JSS-AHER) at Varuna in Mysuru taluk at 4 pm this evening.  The President and his wife will travel by road to Mysore Airport at Mandakalli where they will board a special flight to New Delhi at 5.35 pm. The Airport will be closed for public from 5 pm to 6 pm today.