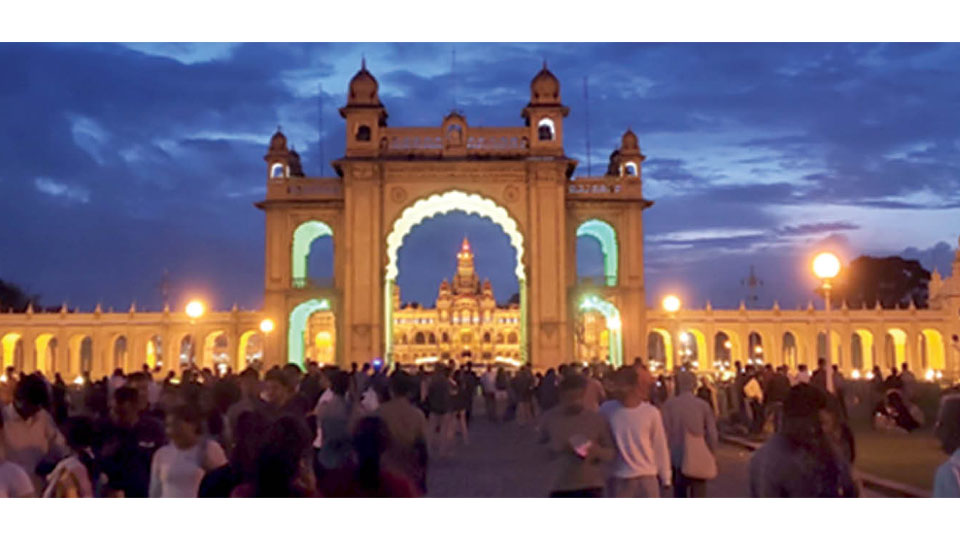 Mysore/Mysuru: As India observed State mourning on Sunday (Sept. 11) over Queen Elizabeth II’s death, the regular Sunday illumination of the Mysore Palace too was suspended as a mark of respect.

But unaware of the cancellation of the illumination, several tourists who had come from far-flung areas to see the brightly lit up Palace, were disappointed. On Sundays, the iconic structure is lit up with over one lakh incandescent bulbs, giving it a golden hue. But the Palace is illuminated daily when Dasara festivities begin.

Though the Palace was crowded yesterday,  the tourists were asked to leave the premises by 6 pm as there was no illumination. Sonil and his family, who had come to Mysuru from Kerala only to see the illuminated Palace, told SOM that he was disappointed to see the Palace with a few lights.

“It is an impressive structure and we drove all the way from Kerala but we have to return disappointed. But ultimately it is a Government decision as a mark of respect to the Queen and we will have to follow,” said the tourist.

This year’s Dasara festival is bound to attract tourists from far and wide, lifting the spirits of the tourism, travel and hospitality industry that is already upbeat following the Government announcement that it will be a grand celebration. Moreover, President of the India Droupadi Murmu has consented to inaugurate the festivities on Sept. 26.

Weekends before the festival are usually crowded and every nook and corner of Mysuru has tourists teeming. Last Saturday was no different.

Even as the preparations were in full swing inside the Mysore Palace where the elephants are sheltered, many tourists, especially children saw the elephant team from far as they were restricted from going near the gentle giants.

As usual, the Palace was full of visitors from different places and among them were school students — 9th and 10th grade — who came from Kshatriya Vidhya Sala English Medium School, Virudhunagar in Tamil Nadu, for a school trip.

Hari Krishna, a 9th grader, told SOM that it was their first visit to the Palace and he enjoyed it to see the magnificent interiors and also loved the pleasant weather of Mysuru. “I will come again,” was his parting shot.

Prabakar Urs, a senior citizen of Mysuru, said that he regularly visited the Palace on Saturdays. “I come here to have a darshan at the Bhuvaneshwari Temple and I spend at least 3 hours of my time walking and enjoying the weather against the backdrop of the Palace,” he said.

A couple with their baby had come from Japan. Kawato, the family head, said that while he liked both the outside and inside views of the Palace, the most interesting thing he found was the colourful artistic structure inside, which is attractive and marvellous. “When we decided to come to India, I wanted to visit the Mysore Palace and today I am here,” the lady said.