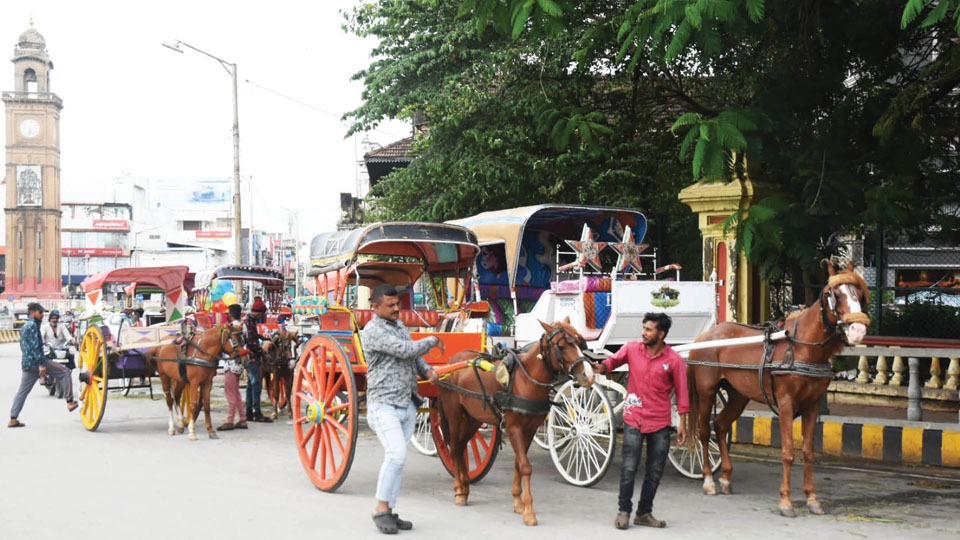 Mysore/Mysuru: With Dasara fast approaching, Tongawallahs of the city are expecting that the Government will extend some benefits to them, which chiefly include distribution of special dress and  payment of honorarium.

Tongawallahs are unhappy that the District Administration has forgotten to give them a treat during Dasara, as was the practice until three years ago.

Upset over the alleged apathy of the District Administration towards them, Mysuru’s Shah Pasand Tonga Association has planned to submit a memorandum to the authorities on Monday seeking Government support during Dasara.

According to Tongawallahs, the authorities used to allow Tongas inside the Palace premises on Dasara inauguration day, the day on which the Palace is gloriously illuminated. They also pointed out that the Tongas were painted afresh and the authorities used to distribute special dresses for Dasara and paid an honorarium to them. But this practice was abruptly stopped three years ago, they said.

Noting that there were more than 200 Tongas in the city not far ago, they said that this number is fast dwindling and now has come down to less than 120. Out of these, 50 are Sarots (Chariots), while the rest are ‘Shah Pasand’ Tongas. Though there are Tonga Stands at Agrahara, near Kukkarahalli Lake, RMC Yard on Sayyaji Rao Road and near Suburban Bus Stand, they are lacking in facilities.

Ahead of Dasara, Tongawallahs get their tongas (horse-driven carts) repaired, painted afresh and specially decorated out of their own pocket. Now they are seeking Government financial support during Dasara to draw more tourists towards them.

With tourists, both domestic and international, being their main sources of income, they believe that Dasara will bring a windfall to them. But at the same time, they are disappointed that the Government has ignored them.

Shah Pasand Tonga Association President Fayaz Ahmed told Star of Mysore that it is a matter of delight that the Government has decided to celebrate Dasara in a grand manner this year. But at the same time, the Government should also look at the plight of Tongawallahs, who are earning a meagre income and as such awaiting Government support at least during Dasara.

Pointing out that Mysuru Tonga rides have earned name and fame not only domestically, but also globally, with many foreigners enjoying the rides, especially during Dasara, he said that though the people of Mysuru and various organisations have been supportive of Tongawallahs, the Government seems to have forgotten them.

Recalling that all Tongawallahs of the city were asked to assemble at Kalamandira during Dasara when H.D. Kumaraswamy was the Chief Minister a few years ago, Fayaz Ahmed said that they were then given two sets of special uniforms, a peta and an honorarium. But since then, the Government seems to have completely forgotten them, he regretted wondering what the Government would do for them this year with grand Dasara celebrations.