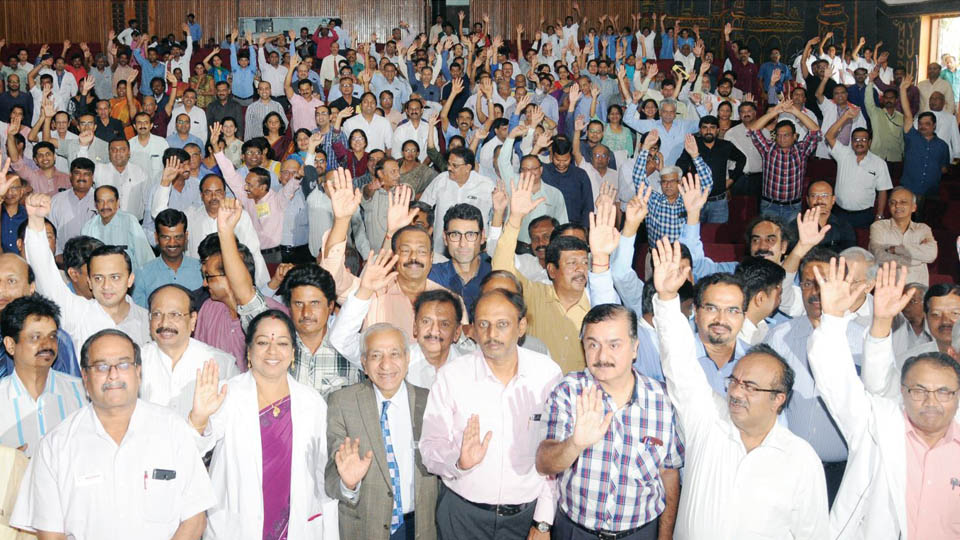 Mysuru: Nearly 1,500 doctors, all private practitioners gathered at the Platinum Jubilee Auditorium at JK Grounds this morning to protest against the implementation of the ‘draconian’ Karnataka Private Medical Establishments (Amendments) Bill 2017, by burning a copy of the Act.

This is the second time in nearly five months (first strike was on June 16) that the Doctor fraternity in the State is going on strike to oppose the Government’s move to put curbs on private medical establishments. Former IMA President and Central Council Member Dr. S.P. Yoganna said that this KPME Act, if introduced, is nothing but a death penalty for doctors practising in private establishments. “There is lot of lacuna in the Act as we cannot oppose it and cannot even seek the assistance of a lawyer. It is nothing but a death knell to our profession,” he said

He wondered how hospitals, nursing homes and clinics with different facilities could all charge the same fees. “Does our charge to the patients not depend on the kind of basic facilities we provide? If this Bill is implemented we will have to shut our establishments,” said Dr. Yoganna.

According to Dr. Yoganna, this was the decision taken at the meeting held in Bidar recently. “All private practitioners have to bid good bye to the profession chanting ‘Namo Naryana.’ As a result of this Bill becoming an Act it is the public and patients who will suffer,” he charged.

The doctors burnt the copy of the Act on the stage in a display of anger and protest. The stir continued until afternoon.

Private Medical Practitioners staging a protest against the implementation of the Karnataka Private Medical Establishment
(Amendments) Bill at the Platinum Jubilee Auditorium in J.K. Grounds this morning.

As nearly 2,000 private establishments including 120 private hospitals and clinics are participating in the 24-hour strike, there was a rush of patients at all the Government Hospitals like K.R. Hospital, Cheluvamba Hospital, Government Ayurveda Hospital, Community Health Hospitals, Primary Health Centres and City Dispensaries.

However, except for the functioning of the Out Patient Departments in private hospitals, the emergency, trauma care departments and the treatment to patients admitted in the wards continued.

The Mysore District Chemists and Druggists Association also showed their solidarity to the strike, though they did not close down their establishments.

A memorandum of the resolution taken will be submitted to the DC this evening.