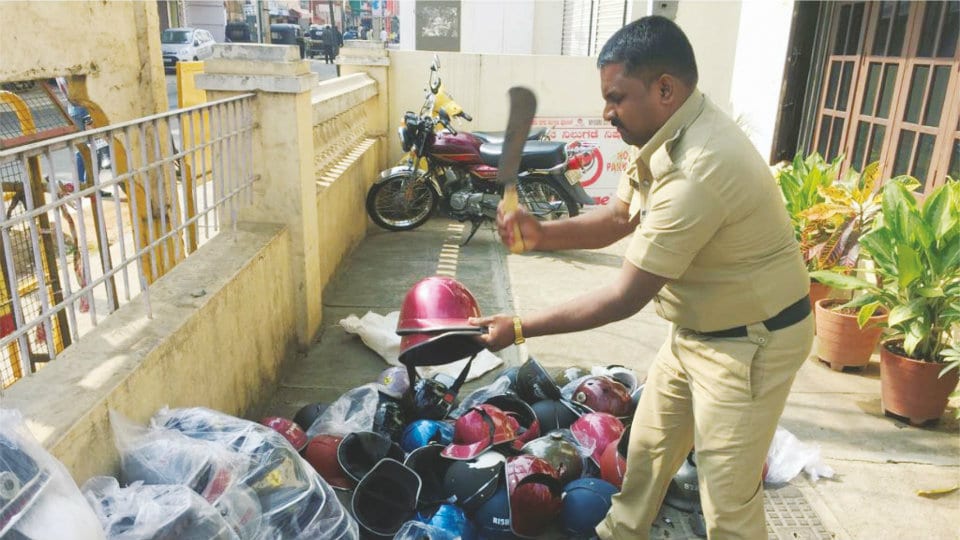 Mysuru: The helmet law in Karnataka states very clearly that both the rider and the pillion rider must wear helmets to prevent or minimise injury to the head and brain. But to avoid being caught and penalised by traffic cops, several residents of Mysuru have been using non-standard helmets that will in no way protect the heads in case of accidents.

After the helmet rule was enforced for pillion riders, the sale of non-ISI-marked helmets picked up with almost every street in Mysuru sporting one or two vendors selling such cheap helmets. These helmets are sold on roadsides for anything between Rs. 100 and Rs. 300, half the cost of a genuine ISI helmet which normally costs anything upwards of Rs. 700.

Cracking on such non-standard helmets, the city Police have started seizing and destroying such helmets that endanger the lives of motorists. Police say that such helmets are not only unsafe but also full of chemical substances that damage the skin when the helmet is exposed to the sun.

Hundreds of helmets were destroyed this morning at the Traffic Assistant Commissioner’s Office in Shivarampet. The helmets were broken into pieces using a machete. Police said that a large number of people buy the cheaper helmets sold on the roadsides even though they are aware of the risks involved — one because they are cheap, and two because for them the helmet is not to avoid injuries to the head but because they want to escape paying a fine for not wearing a helmet.

4 COMMENTS ON THIS POST To “Police destroy duplicate, unsafe helmets”