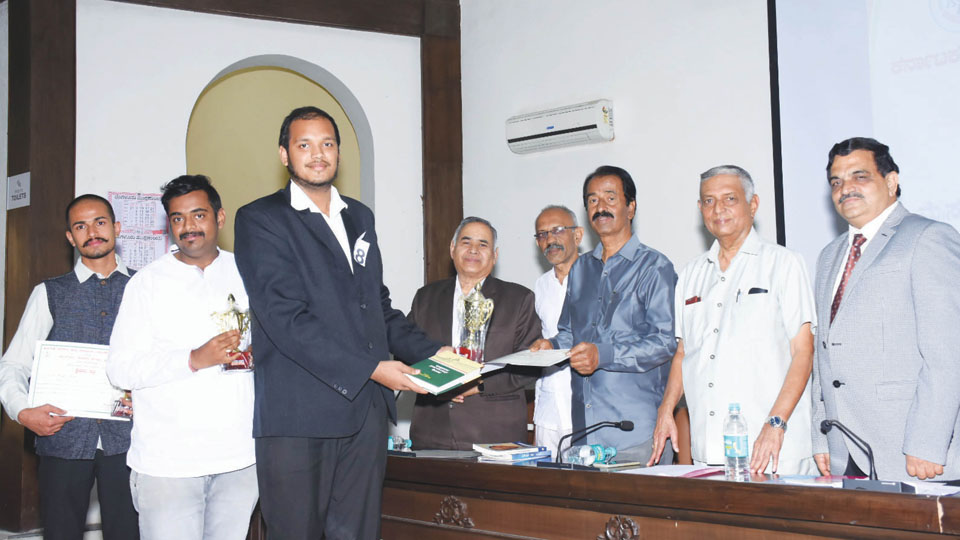 Prizes distributed to students who excelled

Mysore/Mysuru: The valedictory of Mysuru Zonal Mock Assembly Session, organised by KILPR in association with the city’s JSS Law College, at Mysuru ZP Hall, was held later in the evening.

Presiding over the valedictory, former MLC Thontadarya said that there was an urgent need for Law and Parliamentary reforms and such reforms should begin with us and in our homes.

Pointing out that it is essential for everyone to understand that nation comes first, Thontadarya regretted that problems are only increasing after the country gained independence in 1947.

Contending that correcting the wrongs lies in our own hands, he stressed on the need to ensure that people’s power remains in the hands of the people itself.

Recalling his political journey, Thontadarya said that he entered politics after having a brief stint as a Lawyer.

Stating that he spent only Rs. 35 during his first ever election, Thontadarya said that times have completely changed now and people are talking about spending crores of rupees even for minor elections.

Emphasising on the need for Law students to have an independent thinking, he said that they should bear in mind that they are an important part of the society and hence must work for its betterment.

Former MLA Vasu, in his address, said that the contributions made by the erstwhile Mysore Maharajas for the growth of the State remains unmatchable.

Recalling that the city’s K.R. Hospital built by the Maharajas over a century ago still remains popular as ‘Doddaspatre’ among the rural masses, he said that the Hospital is among the many such facilities provided by the erstwhile rulers.

Though he succeeded in bringing many Government  Hospitals on KRS Road as Chamaraja MLA earlier, he still feels that all these are insignificant when compared to the contributions of Wadiyars.

Vasu and Thontadarya distributed prizes to the students  who excelled in the mock Assembly Session.