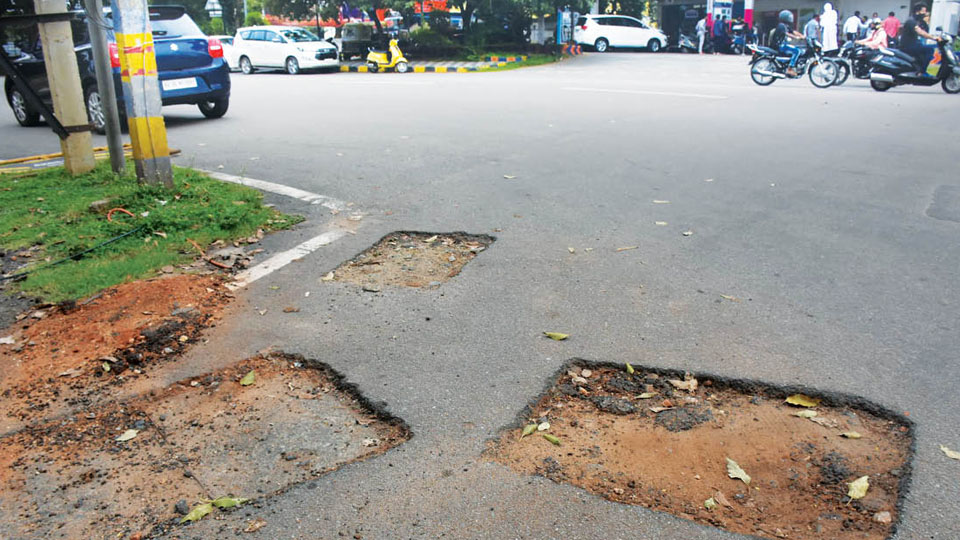 Mysore/Mysuru: The Mysuru City Corporation (MCC) had taken up pothole-filling works soon after the Dasara grants were released. But the works were so pathetic that in most of the places where the filling works were done, the asphalt was washed away and the potholes were back to square one within a week or so.

In their enthusiasm to complete the works and take home the Government grants, contractors filled the potholes in a hurried manner and they were washed away in one rain. The chinks in the armour were exposed soon after the rain water receded into the drains carrying along newly laid patchworks.

Following a public hue and cry on the waste of money, MCC Commissioner Lakshmikantha Reddy and Superintending Engineer (SE) Mahesh called a meeting of all Zonal officers and Assistant Executive Engineers (AEEs) this morning and directed them to re-lay the potholes wherever they have been washed away.

“We have taken this seriously. Over 80 percent of the potholes have been filled and in some places, rain has washed them away. We have asked the contractors to identify all such potholes, cut them properly and re-lay as per specifications. They must complete the works and send us photos of each re-laid pothole as proof,” SE Mahesh told Star of Mysore.  Like the expression ‘The proof of the pudding is in the eating’ meaning that you can only judge the quality of something after you have tried, used or experienced it, the MCC now wants the contractors to take the photo of each filled pothole and send them to the bosses for approval.