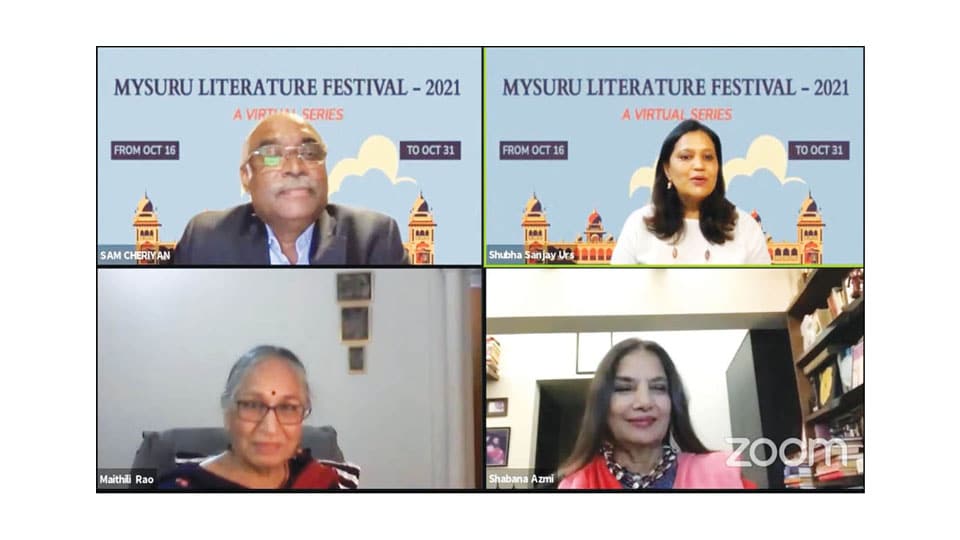 “I grew up in a household where all festivals were celebrated with great joy without any distinction as all festivals are a part of our culture.”

Mysore/Mysuru: “Both majority and minority religious fundamentalism are a mirror reflection of each other. They both feed into the same mind-set. It is important that religious fundamentalism of any kind needs to be confronted. This is what I have learnt from my father Kaifi Azmi. India’s greatest strength is her composite culture and her pluralism.”

These were the words of Padma Bhushan Shabana Azmi, actor, activist, philanthropist and a true woman of substance.  She was speaking on the theme ‘Lights, Camera, Action: A cinematic tale’ last evening at the second virtual session of the Fifth Edition of Mysuru Literature Festival.

As the session began, Shubha Sanjay Urs, Chairperson of Mysuru Literary Forum and Charitable Trust, introduced and welcomed Shabana Azmi while Sam Cherian Vice-Chairman of the Trust introduced moderator Maithili Rao who is a well-known film critic, analyst and the author of the book, ‘Smitha Patil – A Brief Incandescence’.

“I grew up in a household where all festivals were celebrated with great joy without any distinction as all festivals are a part of our culture,” she asserted and later on engaged the viewers by talking about her numerous films and various roles.

She spoke about fundamentalism while replying to a question based on the movie ‘Mee Raqsam’, directed by her brother Baba Azmi. “As I have grown up in a secular atmosphere, it was but natural that our family would take on a subject like this head on,” she said.

Shabana Azmi mesmerised the viewers with her free flow of energetic and charismatic talk and filled the available time with numerous interesting anecdotes and memories and she covered her entire journey starting from her student days when she had set up a theatre group with Farooq Shaikh till her recent tele serial “The Empire” where she plays the role of Aisan Daulat Begum, mother of Mughal king Babar.

She said that it was exciting to play the role of a strong tribal woman who was a ‘King Maker’ and to research to get the costumes right and not to fall prey to the clichéd template of Mughal-e-Azam. She called assembling the right look for any role as “constructed authenticity”.

“But there is still a lot of reluctance and confusion among parents and this needs to be settled. From protest to acceptance, the film scripted and directed by Faraz Arif Ansari has beautifully portrayed this aspect,” she said.

The film has won 18 different awards internationally. “For me such films are very important. We have a tendency to push away who we regard as the ‘other’. And that extends to everything — the other race, gender, nation and religion. And in this world where divisiveness is almost taking over, any work of art which makes a plea, not for tolerance but acceptance and empathy, becomes important,” she noted.

Maithili Rao recalled the outbursts and hostility when the movie ‘Fire’ was released and asked how she felt playing that kind of a role for the first time. Shabana said though she liked the script a lot, she was initially apprehensive as she was then working in the slums with women and she thought it would be used against her in her work.

“I don’t speak on religious lines at all in the social work I do. This I thought would be used as a weapon against me by the conservatives, saying don’t listen to this woman. But Javed said if and when the film comes up for scrutiny, I’m able to defend the film, I should do it and that’s when I decided to go ahead,” she recalled.

India isn’t a monolith. Everybody doesn’t react the same way. I knew some would be puzzled, some angry, some deeply moved. But a process of questioning has to start. And that’s all an artwork can do. Create awareness, a climate of sensitivity where it is possible for change to occur.

Shabana regretted how she couldn’t act in the next sequel ‘Water’, the concluding part of Deepa Mehta’s elemental trilogy, a dark introspect into the tales of rural Indian widows in the 1940s and covers controversial subjects such as misogyny and ostracism. She had even shaved her head for the role. Veer Bhadra Mishra, who was working on the Ganges project, had actually endorsed the script, but the film unit was not allowed to shoot. Finally Deepa Mehta had to shoot the film in Sri Lanka with a different cast. The film was nominated for Oscars.

To Maithili Rao’s question on how she prepares for her roles, and blends intuitiveness and training as an actor, Shabana fondly recalled the lessons from her teacher Roshan Taneja in the Film Institute and said, when you are a trained actor one part of you is always observing and storing.

The listeners were treated to a beautiful recitation of two poems written by Kaifi Azmi and Javed Akhtar and Shabana read out the translations of those poems in English.

An actor cannot always depend on spontaneous inspiration but one must also learn the craft of acting which comes from continuous observations and recording. Shabana Azmi said that a civilised behaviour expects people to control their expressions of their emotions in public but an actor has to learn to do the totally opposite thing and learn to express emotions. However, an actor should be careful not to expose the mechanics of the craft that she is using, she said.

An actor can have moods which mimic the intense roles that the actors portray. Hence, she opines that it is good to have partners who also belong to a similar domain so that the partners understand the toll taken by the involvement of the actor by getting immersed in the role.