Home » News » PSI aspirants sweat it out at CAR Grounds 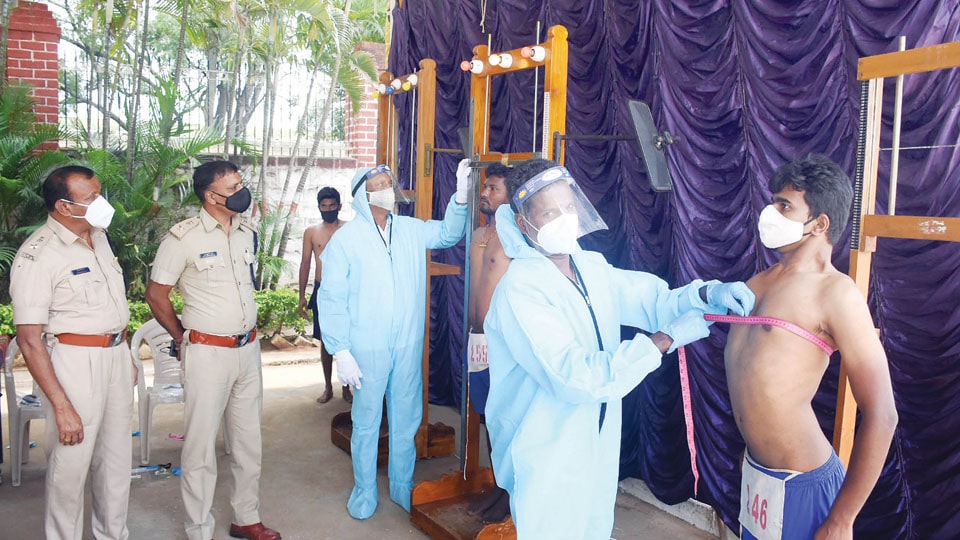 PSI aspirants sweat it out at CAR Grounds

Mysore/Mysuru: Physical test for the selection of Police Sub-Inspector (PSI) aspirants has been going on at City Armed Reserve (CAR) Grounds at the foot of Chamundi Hill in city since yesterday.

As many as 500 PSI aspirants are undergoing the physical endurance test every day and it will be held up to Aug. 2. For the aspirants of other districts in the range — Mandya, Chamarajanagar and Kodagu — it will take place between Aug. 3 and 9, said City Police Commissioner Dr. Chandragupta.

He said, the Government of Karnataka had recently issued notification for the recruitment of PSIs and fixed the dates for physical test. It was simultaneously going on in all districts across the State since yesterday.

Dr. Chandragupta said, Standard Operating Procedure (SOP) prescribed by the State Government is followed in the ongoing selection process. The staff are wearing PPE suits while taking the measurement of height, weight and chest of every candidate as a precaution.

The candidates are made to sit in the safe distance and crowding is not allowed in the Grounds. Only 500 candidates are allowed to take part in physical endurance tests like running, high jump, long jump and obstacle clearance. Those who clear the physical test will qualify for written examination, he added.