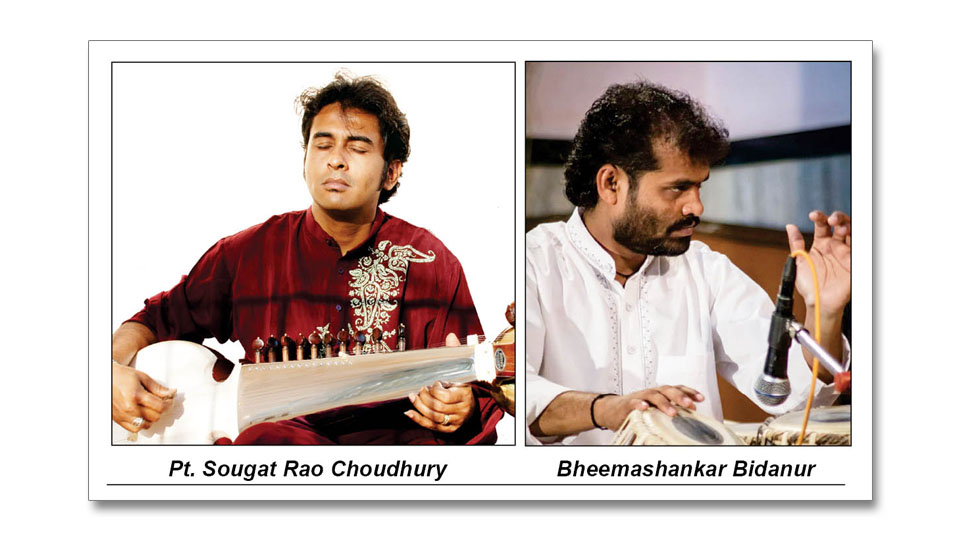 Mysuru: Pandit Rajiv Taranath Foundation has organised a Sarod concert by Pandit Sougat Rao Choudhury on Feb.10 at Veene Seshanna Bhavan at 10.15 am. Bheemashankar Bidanur will accompany him on the tabla.

This is the first time Pt. Sougat Rao Choudhury will be performing in Mysuru. He is one of the finest youth talent who was born in a Bengali family. He grew up in the world-renowned Shantinikethan. His father is the well-known sculptor Prof. Sarbari Rai Choudhury  and mother Ajantha Rai Choudhury, a singer from Agra Gharana.

He was a student of Ustad Gyan Shekar, son of the legendary Ustad Ali Akbar Khan of the Meher Gharana, for nine years. Pt.Choudhury was chosen as the ‘Talent of The Decade’ at the Ahmedabad Sapthak Sangeet Festival in 2010. He is an Akashvani ‘A’ grade artiste.

He has performed in different parts of the world and is teaching nuances of Sarod to the young artistes.

Bheemashankar Bidanur is familiar to the music-lovers of the city as he has accompanied many well-known artistes. Bheemashankar has received training from Pt. Shivaputrappa Hoogar, Pt. K.S. Hadapada and Pt. Puttaraj Gavai, and is currently serving at Dr. Gangubai Hangal Music and Performing Arts University as a tabla artiste. He has also established his own music school and teaching young talents, according to Pandit Rajiv Taranath, Managing Trustee of the Foundation in a press release.

ONE COMMENT ON THIS POST To “Pt. Sougat Rao Choudhury’s Sarod concert  at Veene Seshanna Bhavan on Saturday”