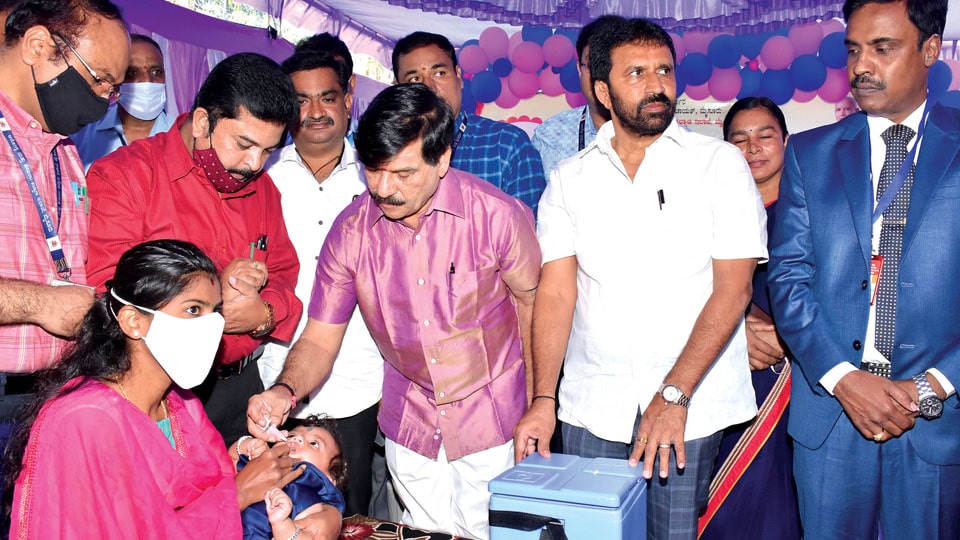 A host of dignitaries and Health Department Officers were present to launch this nationwide vaccination drive aimed at administering pulse polio drops to kids in age group of 0-5 years to prevent polio cases. India has been a polio-free country, thanks to intense vaccine drives held every year to cover millions of kids across the country. However, this drive did not take place last year due to COVID-19 pandemic.

Speaking on the occasion, Ramdas said of the total 130 million population, around 18 per cent of them were kids in the age group of 0-5 years who are targeted for pulse polio immunisation programme. The total number of polio cases in India was around 50,000 in 1980 and it dropped to hardly 50 cases in 2019. The Government of India has taken this up as a movement to make the country free from polio.

Nagendra said though polio cases were reported in other countries, it had been totally wiped out from India and added that citizens must join hands with the Government to administer polio drops on the eligible kids.

Ramdas and Nagendra said that they was ready to take COVID-19 vaccine anytime when their turn comes. In Mysuru district, the total active cases as on today stood at 213 which indicate a big improvement in COVID-19 situation. “In the first round, Healthcare workers have been vaccinated. In second round, frontline warriors and the elected representatives from Gram Panchayat to Parliament will be vaccinated, ” they added.

Dr. Amarnath said as many as 2.44 lakh kids are targeted for immunisation in district. As many as 1,945 booths have been set up and 27 mobile teams have been stationed railway station, bus terminals, markets, malls and other places to administer polio drops, he added.