Home » Columns » Racing Ahead… Set your own goals 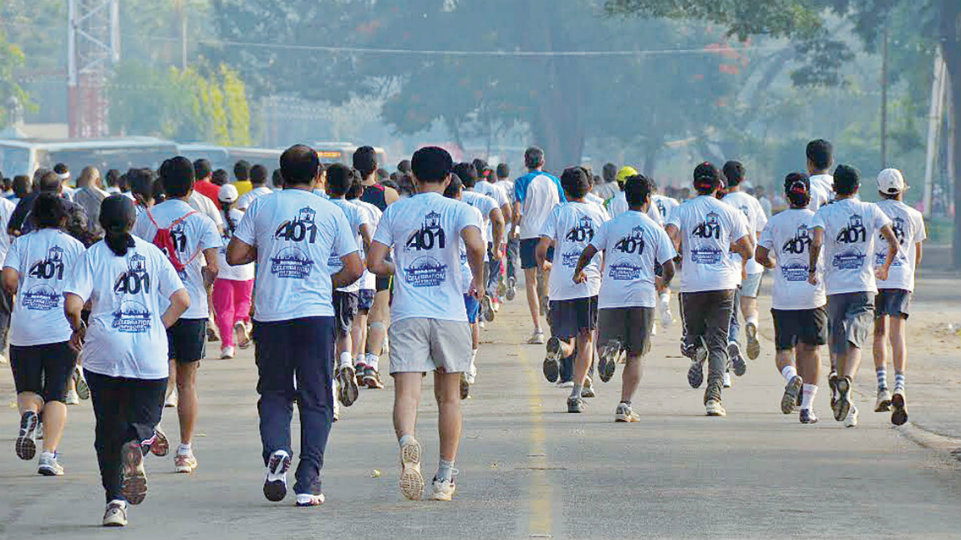 Racing Ahead… Set your own goals

A beautiful message I saw in my WhatsApp. I thought of sharing it with SOM readers:

I was jogging this morning and I noticed a person about half-a-km ahead. I could guess he was running a little slower than me and that made me feel good. I said to myself, I will try to catch up with him. So I started running faster and faster. Every block, I was gaining on him a little bit.

After a few minutes, I was only 100 ft behind him so I really picked up my pace and pushed myself. I was determined to catch up with him finally and I did it! I caught up and passed him. Inwardly I felt very good, “I beat him.” Of course, he did not even know we were racing!

After I passed him I realised I had been so focussed on competing against him that I had missed my turn to my house. I had missed the focus on my inner peace. I had missed to see the beauty of greenery around. I missed to do my inner soul searching meditation, and in the needless hurry stumbled and slipped twice or thrice and might have broken a limb.

It then dawned on me that this is what happens in life when we focus on competing with co-workers, neighbours, families that are more successful or more important and in the bargain, we miss our happiness within our own surroundings. If one can control greed, half the job is done. To aspire to own a Benz is perfectly ok but wanting to own a Benz because somebody else is owning it, is wrong.

We spend time and energy running after others and we miss out on our own paths to our destinations. The problem with unhealthy competition is that it is a never-ending cycle.

There will always be somebody ahead of us, some one with a better job, more money in the bank, better car, more education, a prettier partner, better behaved children, better circumstances and better conditions etc. But one important realisation is that you can be the best that you can be, when you are not competing with anyone.

Take whatever you have, the height, the weight and personality, accept it and realise that you are blessed. Stay focused and live a healthy life. There is no competition in destiny, each has his own. Run your own race at your pace that leads to peaceful and happy life.”

A beautiful thought but in reality when I look back at my own life, I also might have run some unhealthy races against people in my prime. Yes, now that I have retired and resting I can probably think philosophically. This does not mean that you do not have any goals in life or ambition. Those things are necessary for you to achieve your own goals. But do not set goals keeping somebody else in mind.

It is said that no lines in the palms of all human beings are same. Each human being born is unique and comes with his or her destiny, some have it easy and some have to struggle for every small thing, but that is destiny. Every industrialist’s ambition is to become an Ambani but is it possible?  Two brothers Anil and Mukesh were given the same starting platforms but look where are they now? Mukesh is powering ahead into becoming the richest Indian and the other brother Anil had to be bailed out by his brother to avoid a jail term! All the companies of Anil are in a shambles. Have you noticed in long distance races, those who look back always lose but those who concentrate on their own running always win. Ultimately, the winner is always hard work, hard work and hard work. Combined, of course, with a slice of good luck. There is a saying “God also helps those who help themselves.”

Every one is on the run. One just has to go to the local Railway Station either in Mumbai or Sealdah in Kolkata. For the first time I understood what “a sea of humanity” means. Even at 2 am, one has to just go to Dadar Station, you see hundreds of commuters moving around in the city that never sleeps, Mumbai. You have to run or walk briskly, otherwise you are pushed aside. Life is also like that. You run and run with a goal in mind just ignoring everybody else.

To conclude, walk, jog or run at your own pace so that you are able to enjoy the beauty around. To be born as a human being is a blessing. Nothing is more important than health. Unhealthy competition can lead to a lot of stress which can very well be avoided. Ultimately, what do we aspire for? To be happy and content? Do you agree?

Motivation N.K.A. Ballal WhatsApp
Dogs of the Gods
How the Modi-Shah combine is like no adversary the Congress has ever encountered before?