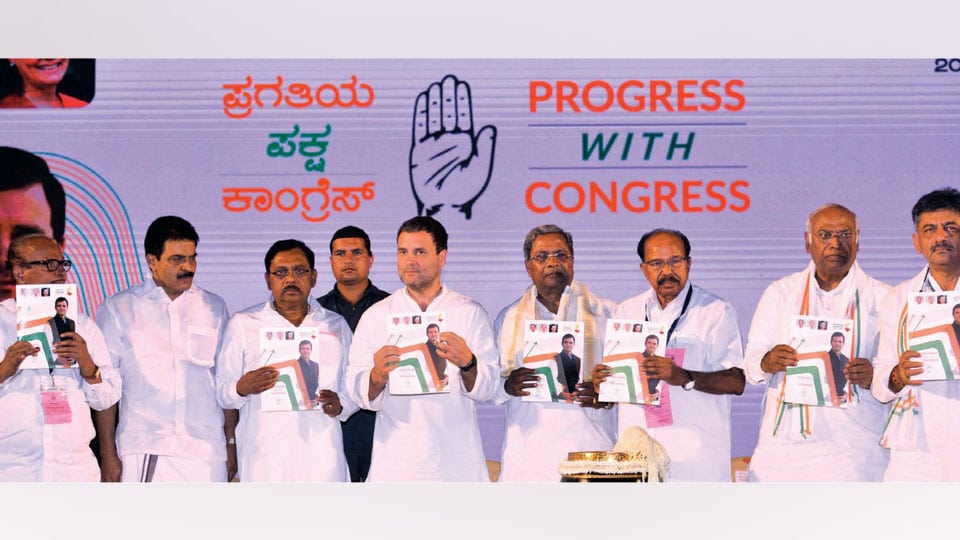 Mangaluru:  The ruling Congress Party in Karnataka released its manifesto in Mangaluru on Friday and assured to remove unemployment by creating 10 million jobs in the next five years, if the party is voted back to power.

The Congress manifesto promises insurance for owners of micro, small and medium enterprises, one water tap in every urban household, 50 percent subsidy for women to purchase ‘women friendly’ scooters, free sanitary pads and an endeavour to have 50 percent reservation for women in Government jobs.

Rahul Gandhi, All India Congress Committee (AICC) President, releasing the election manifesto in Mangaluru at a public rally on Friday, said that the manifesto was prepared in consultation with the people of the State.

The manifesto said a Congress Government in Karnataka, along with other Southern States, would “fight” to ensure a fair share in devolution of funds from the 15th Finance Commission’s Report. It made a commitment to food security and to draft a blueprint to utilise for 80 tmc.ft additional water in the Cauvery basin. It assured to expand the IT sector and build high-tech IT talent, besides increasing the number of start-ups. It also promised to give subsidy to start-ups.

On education, the manifesto also spoke of setting up good quality schools and government-aided coaching institute for competitive exams, besides promoting Kannada language across the State. It also spoke about implementing a “vana kaval yojana” scheme in forests to reduce man-animal conflict.