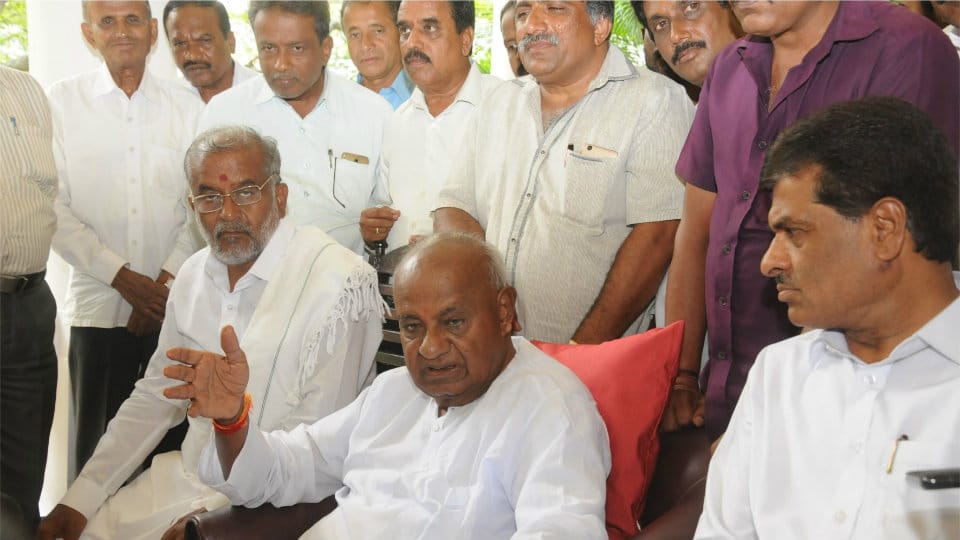 Mysuru:  Asserting that the JD(S)-BSP alliance will rule the State, no matter if it fell short of majority, JD(S) Supremo and former PM H.D. Deve Gowda debunked pre-poll surveys by some agencies, which have predicted that the JD(S) would not get more than 40 seats.

Addressing a press meet here this morning, Deve Gowda said that the JD(S) would take the support of Independent MLAs to form the Government, if the party fell short of majority.

Launching a tirade against JD(S) rebel MLAs who quit the party and one contesting the Assembly polls on Congress ticket, Deve Gowda rued that these MLAs had backstabhed the JD(S) and the people would teach them a befitting lesson.

When asked whether he would campaign in Chamundeshwari, he said that G.T. Devegowda was the most capable candidate to take on CM Siddharamaiah.

The former PM said that he would not campaign in Chamundeshwari as G.T. Devegowda would manage himself. Referring to Income Tax raids on Congress leaders recently, Deve Gowda defended the raids saying that the I-T Department was only doing its job and elections will be taking place through out the year at one corner or the other of the country.