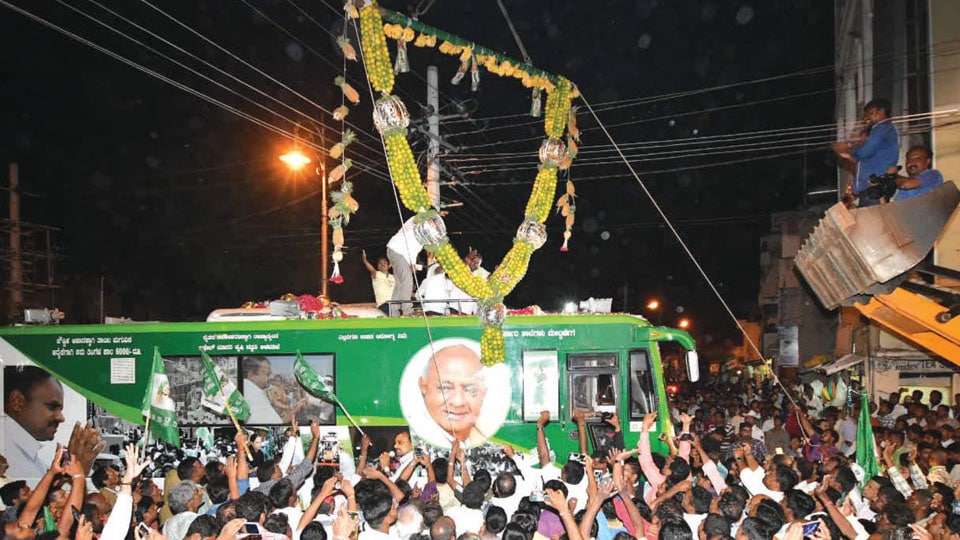 Mysuru: Strongly criticising Chief Minister Siddharamaiah’s claim of distributing rice at subsidised rates to the public, State JD(S) President and former CM H.D. Kumaraswamy has maintained that the Government was funding the Anna Bhagya scheme from the State exchequer.

Addressing a gathering in front of Chamundeshwari Temple at K.G. Koppal in city on Friday, Kumaraswamy, who sought votes for the party’s Chamaraja candidate Prof. K.S. Rangappa, said that it was the people’s money that is being used for the Anna Bhagya scheme.

Alleging that the Congress Government’s excise policy was destroying families. Pointing out that he had banned the sale of arrack when he was the CM,  Kumaraswamy said that the Congress lacked in addressing serious issues.

Accusing the Congress Government of promoting Goonda Raj in the State, he said that the recent attacks on JD(S) workers will boomerang on the Congress.

Referring to the Congress manifesto released by AICC President Rahul Gandhi in Mangaluru, the JD(S) leader noted that there was nothing new in it, but a few programmes were being floated to loot tax payers.

Earlier, Kumaraswamy conducted a road show in Chamaraja Constituency and sought votes for party candidate Prof. K.S. Rangappa on the basis of the development works taken up during his tenure as Chief Minister for 20 months.

He also announced loan waiver for farmers and enhancement of pension for senior citizens.