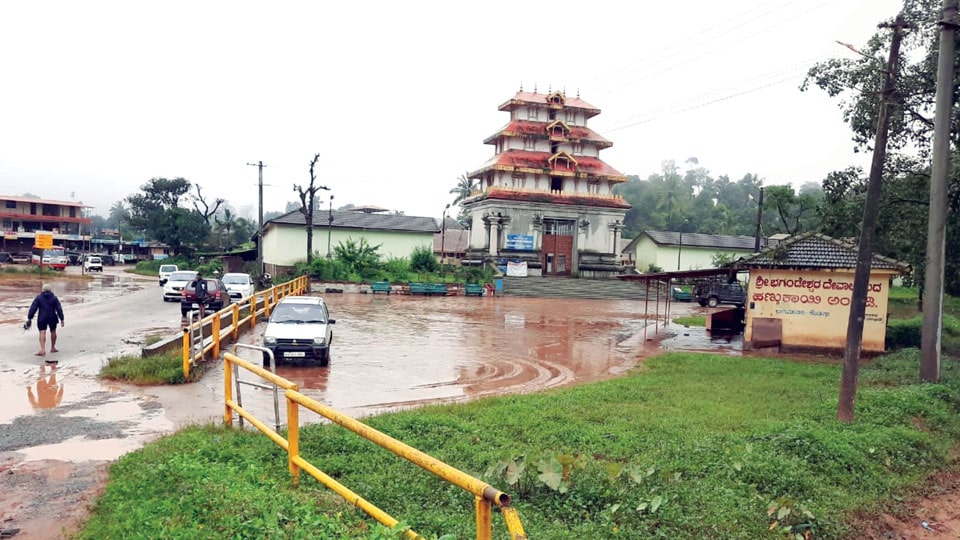 Madikeri: While the reduced intensity of rain in Kodagu has accelerated relief and rescue operations, the overall flood situation at several parts of the District continues to be still grim.

Though heavy rains have given a break since last evening, water level has not fully receded and in the district and 52 villages and towns are flooded, said the District Administration. Twenty other families at Bhagamandala are being moved to relief centres. People at landslide-and-flood-prone Ayyappa Hills, Nehru Nagar and other unsafe places are being moved to relief centres.

Search on for 4 missing

Meanwhile, the body of one of the five persons, who went missing after a landslip hit Talacauvery on Wednesday night, was found by NDRF yesterday.

The deceased has been identified as Ananda Theertha (86). He and his brother, Narayanachar, the priest of the main temple at Talacauvery; the latter’s wife Shantha, and two assistant priests, Pawan and Ravikiran, went missing after a portion of the hill caved-in owing to heavy rains.

The body was found 600 metres away from the house. The operations are underway to recover the bodies of four others and carcasses of several cattle heads. With some respite in rain, NDRF and SDRF personnel have begun search operations at landslide-hit foothills of Brahmagiri Hills. Despite a break in the showers, flood situation in 52 places of the hilly district is grim. Kushalnagar is the worst hit with many residential areas under the overflowing Cauvery.