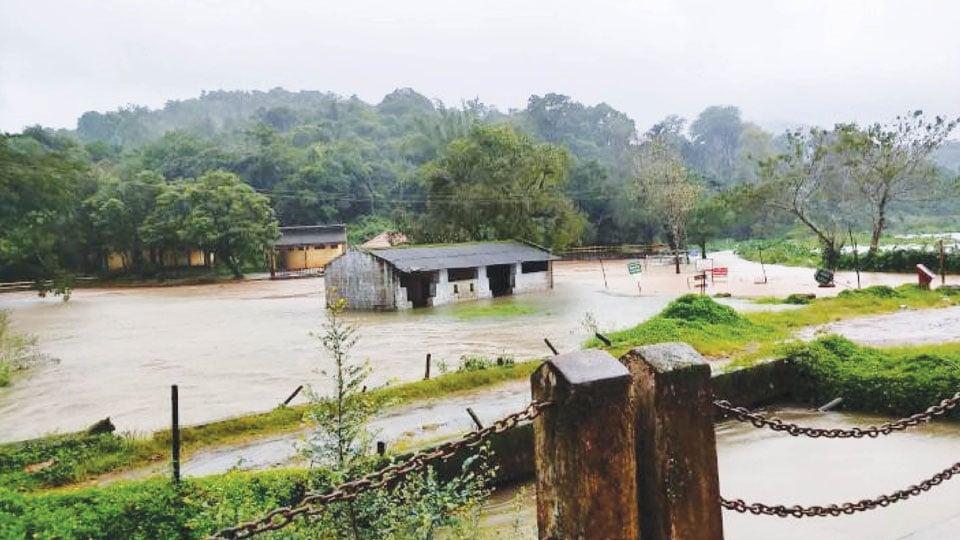 Madikeri/Kushalnagar: The delayed South-West Monsoon has intensified in Kodagu and has gained vigour since the last four days. The constant downpour has led to massive damage of roads, bridges and have also caused landslides at many places, blocking vehicular traffic.

Major roads like the Chettalli-Madikeri Road, Ponnampet-Srimangala Road near Nalkeri has been blocked and many other roads like Murnad-Bhagamandala, Madikeri-Bhagamandala Road near Ayyangeri have at least two feet of water flowing over them. Rivers Cauvery and Lakshmanatheertha and all other tributaries and rivulets are flowing in full spate, threatening the lives of people living on the banks.

Bhagamandala, Cherangala, Korangala and Talacauvery are reporting highest rainfall and vehicular traffic has come to bare minimum. Water level of Cauvery is above the danger mark and the road between Kakkabbe, Kunjila and Painari Darga has been submerged under water.

People living on the banks of River Cauvery at Napoklu, Yedapala, Kottamudi, and Kondangeri have been asked to move to safer areas and over 50 families have already shifted far from the banks. The small bridge at Balamberi has been submerged and more than 10 feet of water is flowing above the bridge. However, traffic has not been disrupted as a new bridge has been constructed near the small one.

The Madikeri-Chetalli Road has been blocked for the third consecutive monsoon and the Madikeri-Mangaluru Road that links Mysuru to Mangaluru has developed cracks at various places. The Hoddur-Murnad-Napoklu-Balamberi road has been cut off as River Cauvery is overflowing in many places.

Water level in Kadanoor village and Bethri Bridge that links Virajpet and Madikeri taluks too is above danger mark and water has entered low-lying areas.

The low-lying areas of Karadigodu near Siddapura have been marooned as Cauvery is flowing in full spate. Virajpet Tahsildar Yogananda visited the river  banks at Bethri to take stock of the situation. The retaining wall of the road near Hodakana village has breached.

Major landslides have been reported in Mukkodlu village on the Avandi-Yemmethaalu Road and Hattihole-Hammiyala and this entire belt is notorious for unbridled development where mountains have been excavated to build houses and resorts.

The area now is a landslide- prone one and mudslides have been reported since the last four years. Landslides have also been reported at Kaloor. Fear of landslides has gripped the residents of Hattihole, Yemmethaalu, Thanthipala, Mukkodlu, Madapura, Soorlabbi and surrounding areas.

In view of the imminent threat to the Mysuru-Mangaluru Road via Madikeri as cracks have developed at many parts, Virajpet MLA K.G. Bopaiah has suggested the Kodagu District Administration to ban the movement of heavy vehicles on the road.

The road that criss-crosses many areas like Sampaje, Katakeri, Karthoji and Madenadu has developed cracks and at many places the metal-fence edges have collapsed. Also, a mud mound has collapsed on the road near Second Monnangeri. Inspecting the areas, Bopaiah said that more damages to the road can be prevented if the heavy vehicle movement is banned.