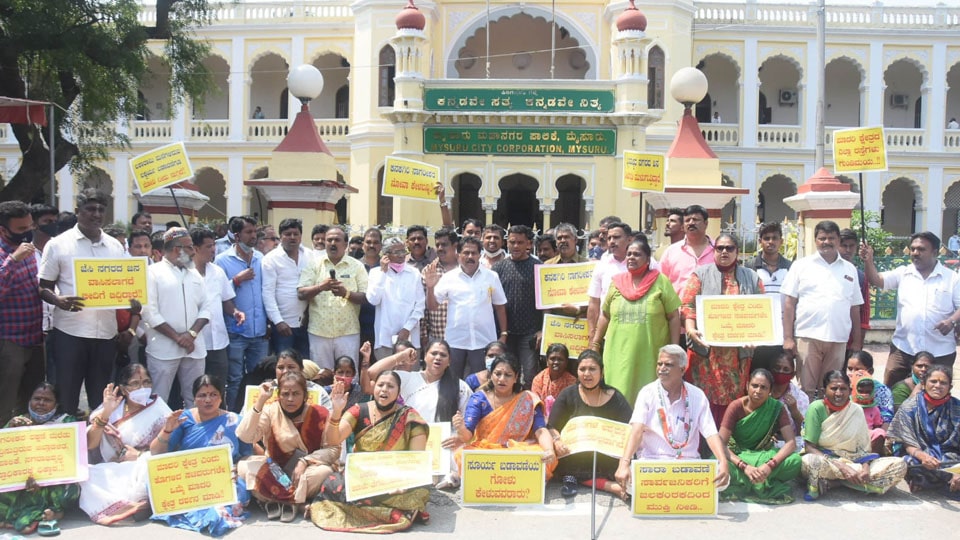 Mysore/Mysuru: Accusing Krishnaraja (KR) Constituency MLA S.A. Ramdas, District Administration, MCC and MUDA officials and Corporators for showing negligence in preventing rain related problems in the Constituency which has been inundated with rain water, former MLA M.K. Somashekar, along with residents of the Constituency, staged a protest in front of MCC Office here yesterday.

Somashekar, who spoke, said that the Constituency MLA had conducted a 20-day Modi Utsav, during which many Ministers including Chief Minister Basavaraj Bommai attended the events and said that Krishnaraja was a model Constituency for other Constituencies.

But many areas such as Srirampura 2nd Stage, Aishwarya Layout, J.C. Nagar, Siddarthanagar, Surya Layout, Madhuvana Layout among other areas coming under KR Constituency are the worst effected due to heavy rains, he said and added that with bad roads, clogged drains, blocked UGDs and other problems, how can Krishnaraja Constituency be a model Constituency to others.

Accusing MLA Ramdas of staying put in Delhi and lobbying for a Cabinet berth instead of coming to the help of the residents of his Constituency, Somashekar also accused the officials concerned for failing to respond to the problems of the Constituency residents.

The former MLA submitted a memorandum to Mayor Sunanda Palanetra, who came to the protest spot and urged the Mayor to take steps to prevent rain related problems in the Constituency.

The Mayor said that officials have been instructed to step up relief works in the rain-hit areas of KR Constituency and take steps so that such problems would not occur in future.