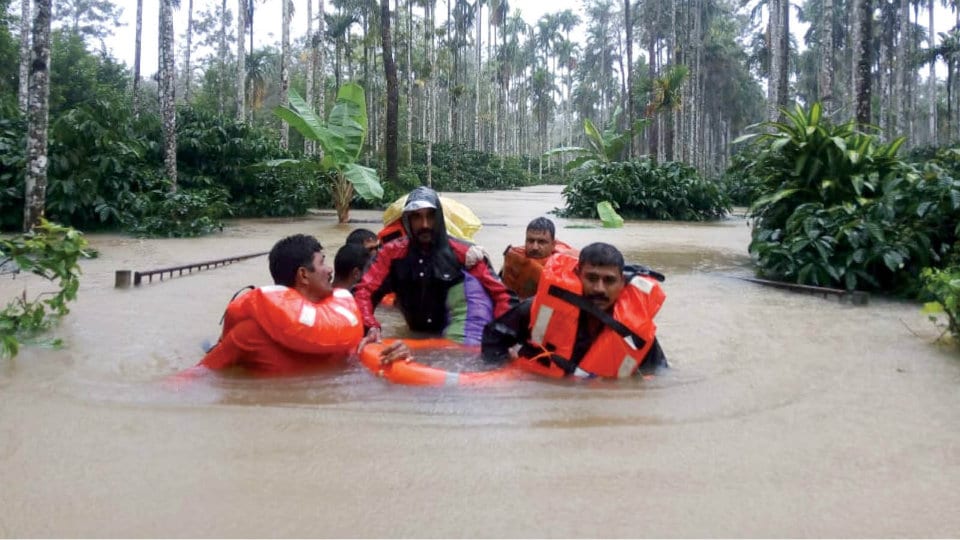 Incessant heavy to very heavy rainfall is lashing Kodagu since the last four days bringing untold misery to the people of the hilly district. While last year’s havoc of floods and landslides — a result of a series of cloudbursts — was concentrated in Madikeri and Somwarpet Taluks, this year the scene has shifted to South Kodagu. All the small rivers and rivulets in city areas of Murnad, Napoklu, Gonikoppal and Ponnampet are looking like endless muddy oceans, flooding roads, bridges and houses on either side.

Here is a photo feature on rains in the birthplace of Cauvery where Star of Mysore photographers fold up their pants, wear protective jackets and unfurl umbrellas to protect their cameras to bring you some of the disaster images.

VITAL LINK CUT OFF: The Bethri Bridge that connects Virajpet Taluk to Madikeri submerged this morning, cutting off the link between the two taluks.

SHEER FORCE: A giant tree that was uprooted in last year’s floods in Jodupala on Madikeri-Mangaluru Highway was washed away yesterday due to the sheer force of gushing water.

WARNING FLAG: A red flag has been put up at the Bethri Bridge warning motorists. Now that the bridge is submerged, there is no question of vehicles moving from one side to another.

WHEN STREAMS TURN HUGE RIVERS: This is a scene from Venkatappa Layout in Gonikoppal near the banks of Keerepole that is flowing in full spate. Mostly economically weaker sections have built their houses in this area. The Gonikoppal-Ponnampet Road has been blocked as there is 3 feet deep water on the bypass road.

NEARING THE DANGER MARK: River Cauvery seen flowing hitting the danger mark of this bridge at Kushalnagar. Last year, there was 10 feet water above this bridge as thousands of cusecs of water was released from Harangi Dam.

Do we really need to widen this road?

THINK TWICE BEFORE DESTROYING NATURE: This is National Highway-275 that connects Mysuru to Bantwal via Madikeri. Sand bags and supporting concrete blocks placed on the road embankment are sliding down the valley and the road has developed deep cracks near Madikeri. Ironically, there is a proposal before the Government to widen this same road. Environmentalists have raised their voice against this widening as it would cause extensive damage to green cover between Kushalnagar and Sampaje.

A DANGEROUS BRIDGE: A coconut tree branch is seen placed to cover a hole that has been created on the Thantipaala Bridge. The bridge is in danger of collapsing and last year, there was unprecedented floods and landslides at Thantipaala.

PEOPLE INCONVENIENCED: The connecting bridge at Bethri too has submerged bringing life to a standstill. People cannot venture out of their homes even to buy essential supplies.