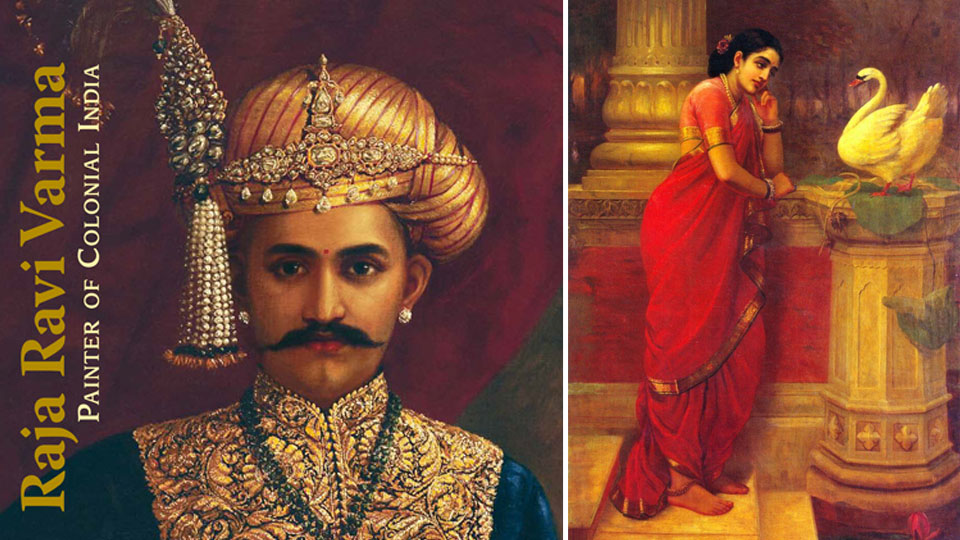 There are hundreds of painters all over the world but Ravi Varma belongs to the royalty of Kerala. This may be compared to His Highness Jayachamaraja Wadiyar, the Maharaja of Mysore who was a Music Composer. Ravi Varma was the name given to him by his parents but the British out of respect added the word Raja meaning king to him. Thus he became famous as Raja Ravi Varma.

Ravi Varma was born on 29th April 1848 at a small place called Kilimanoor situated near Thiruvananthapuram. His father was Ezhumavil Neelakanthan Bhattatiripad and mother Umayamba Thampurratti. His father was a scholar in Vedas and Sanskrit while his mother was a good singer. Thus he was provided with an atmosphere which culminated in Ravi Varma becoming an oil painter. Even at the young age of five his interest in painting began to develop. His uncle noticed this and encouraged him to take up painting seriously and guided him to become a painter. Ravi Varma studied the famous Vishnudharmottara Purana which is a good source for Hindu paintings. This broadened his outlook on our painting.

By about this time painting was confined to Palaces and temples and mostly it was devoted to paint Gods and Goddesses, depending on mythological themes. The painters themselves had to prepare their colours and it was done by using leaves of plants. An opportunity arrived at his doorstep as it were to get paintings done at the Palace of Raja Ayyalayam Tirunal. He got an opportunity to examine the paintings. He took up the study of the wall paintings of Padmanabha temple. These paintings were done by great masters from Italy. He was highly influenced by these paintings. They were quite different from what he had seen so far.

He studied Edward Moore’s painting titled Hindu Pantheon, which consisted of paintings like Sun driving a chariot driven by seven horses, Devaki, Krishna and the like, and they influenced Ravi Varma greatly. His resolve to know the secrets of the preparation of various oil colours increased. He immediately requested the Padmanabhapuram Palace artist Ramaswamy Naikar to teach him the secrets of the preparation of the colours. But he refused and this made Ravi Varma’s intention stronger. Though he wanted to devote full time for paintings, his parents insisted and got him married to a charming woman by name Pururarottinal Thamburatti. Fortunately she began to encourage him in the art of painting.

In 1868 a portrait painter by name Theodor Jensen from Holland had come to Thiruvanchoor and he was preparing paintings in the Palace and Ravi Varma got an opportunity to observe him doing the paintings. Jensen was a specialist in European style of painting. This great painter also did not tell him the secrets of mixing colours. And  Ravi Varma’s resolve became stronger and he began to study the works of Italian painters like Rubens, Raphael, Rembrandt and French paintings by masters like Gustave Boulanger and others.

Without a teacher, Ravi Varma studied the art of painting for about nine years, and became an expert in mixing different colours. He became an adept in portraying objects, men and women in their natural form. This was first achieved by Ravi Varma in the history of Indian painting. This is another greatness of Ravi Varma. He was requested to take up the paintings of the family members of Palghat Krishna Menon and it continued for a long time. He came to know what he should paint hereafter and produced masterpieces which brought him glory. He chose to paint portraits of his patrons, heroines in Ramayana and Mahabharata, Kalidasa’s Shakuntala etc. By these paintings his fame spread far and wide.

At that time Lord Hobart was the Governor of Madras (now Chennai) and he organised an exhibition of paintings of Ravi Varma. Ravi Varma’s painting titled A Nayar Lady in the process of combing her hair was selected for the first prize. Later another painting titled A Tamil Lady playing the Sarabat (a Spanish musical instrument) won the Governor’s gold medal. Then he turned towards Kalidasa’s drama Abhijnana Shakuntala. Based upon this drama he painted a beautiful painting titled Love letter to Dushyantha. This was considered as the most beautiful painting and won laurels in Chennai painting exhibition in 1886. This became so famous that Monier Williams printed this on the front page of his work. This brought great fame to Ravi Varma. Next three years Ravi Varma spent his time in preparing paintings of life-like portraits. In 1878, he got an opportunity to prepare a painting of the Governor of Madras namely Duke of Buckingham.

Then he painted a picture which depicted Sita entering the earth. His another painting titled A Nayar Beauty exhibited in Poona got him the Gaikwad gold medal. In 1881, when Sayyaji Rao assumed the exalted office of Gaikwad of Baroda, Ravi Varma was specially invited for this glittering function. He stayed in Baroda for four years and painted their family portraits and also painted the pictures of Mahalakshmi, Saraswathi, Nala-Damayanti, Sita siddhi etc. Of these Nala-Damayanti is most famous and most of the traditional homes had this painting.

His Highness Chamaraja Wadiyar of Mysore invited Ravi Varma and his brother to Mysore in 1885 and Ravi Varma painted life-like portraits of the family members of the Maharaja. In addition he painted a singing gipsy girl, a girl near the water-tap, king’s procession, Muslims praying in congregation, a person playing on Sitar, steps of the Chamundi Hill, lovers sitting on the stone bench etc. They were painted during this period. Then he concentrated on paintings of Jhansi Laxmi Bai, Keralavarma, Principal of Presidency College, Thomson etc. Ravi Varma was mainly responsible for the opening of Sri Chitra Art Gallery at Thiruvanchoor. At the suggestion of Dewan Madhavan Nair, who was the Regent of Baroda, Ravi Varma got machinery to print a large number of copies of Ravi Varma’s paintings from Germany and set it up in Bombay. From then the copies of the paintings of Ravi Varma were easily available to all lovers of painting at an affordable price.

During the year 1892-93, an international exhibition was organised at Chicago (USA) and Ravi Varma’s Malabar Beauty, Begum at the Bath, Expectation, Gipsies of South India, The Bombay Singer etc., won the admiration of the world artists. Again he was invited to Mysore by the royal family. He prepared paintings for the Wadiyars’ family and painted many pictures which are now exhibited in the Jaganmohan Palace Art Gallery. In fact it is a store-house of paintings of Ravi Varma of which very important are Sri Rama breaking the bow, Setubandhana, Lord Sri Krishna as an envoy etc.

Without taking any rest he prepared hundreds of paintings, arranged their exhibition, travelled in India and abroad. He died peacefully in 1906 in Thiruvanchoor. With his passing away a brilliant chapter in Indian painting came to a close. End of an era began in the art of painting all over the world. We can pay homage to this savant by opening more painting schools in the name of Raja Ravi Varma. There are some Universities where music and other forms of finearts are taught including CAVA in Mysuru. More and more people should be made to take interest in paintings. Finally painting schools should be opened. India was famous for painting in Ajanta, Ellora, Hampi, Tanjavur etc., and Sigiriya in Celyon.

Many places of performing arts have already come into being and they should be encouraged. Mysuru being the cultural capital of Karnataka, an auditorium should be named after Raja Ravi Varma. That is the best homage that a grateful nation can pay to the Emperor of Painting.

9 COMMENTS ON THIS POST To “Raja Ravi Varma: The Emperor of Painting”