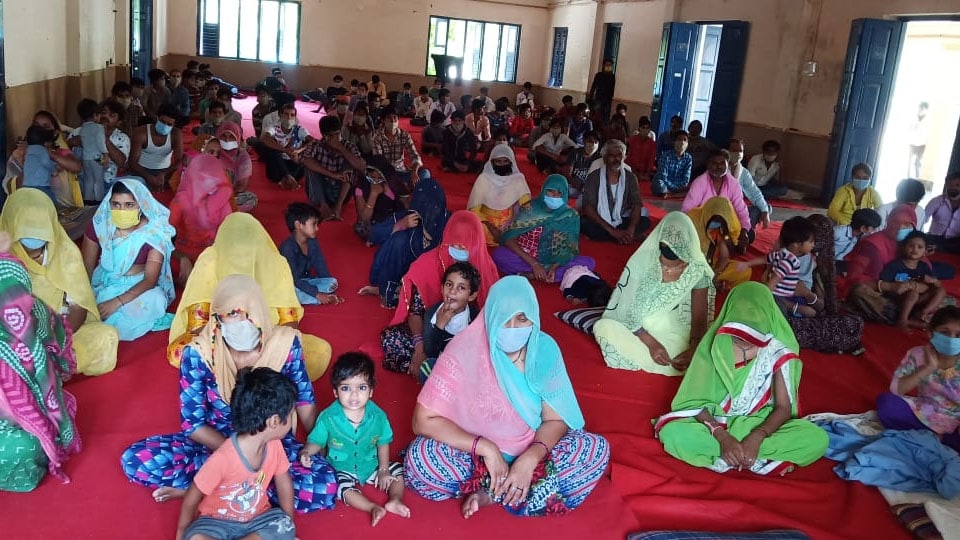 Mysore/Mysuru: Thousands of migrant workers have been stranded in places across the country since the nationwide lockdown was enforced on Mar. 25. To ease the situation, the Centre on Friday gave its nod for stranded migrant workers, students and others to return home by “Shramik Special” trains that will be run by the Indian Railways.

In Mysuru, there are over 170 migrant workers from Rajasthan who are now left stranded due to the COVID-19 lockdown. They have been provided shelter at the CITB Choultry in Siddarthanagar. They are desperately waiting for the District Administration to transport them back to Rajasthan in any one of the “Shramik Special” trains.

“We have seen the news on TV and have read in Rajasthani newspapers that many from our native places who were stranded across the country have been sent home through the Shramik Special trains. Even we want to go home but so far no official has approached us with a return home plan,” Rehman Khan, a Paani Puri seller told ‘Star of Mysore’ this morning.

“We are desperate to go home and we know that authorities from many districts are arranging either for special trains or buses to reach the connecting destinations from where the train starts or halts to pick up migrants. So far no official has approached us and we urge them to send us home,” said Kaalu Singh, a street food vendor who was eking out a living in Mysuru.

These workers, along with their families, had come to Mysuru years ago and earned their livelihood by selling roadside snacks. But following the lockdown, these families had earlier planned to return to their native places in Rajasthan.

As planned, they left for Rajasthan in two trucks on Mar.30 and had entered Maharashtra when they were stopped by the Maharashtra Police near Solapur. Despite repeated pleas, the Police did not allow them to proceed further and left with no other option, they returned to Mysuru on Apr.1, when they were intercepted by the city Police on the Ring Road at Alanahalli. Later, the District Administration sheltered them in CITB Choultry at Siddarthanagar where they are just dreaming when they will be able to return to Rajasthan.

Rehman Khan rued that they could not stay with their families when all others are spending quality time with family in their homes during the lockdown. Pointing out that he was staying with his family in Mysuru for the past few years, he said that all his extended family members resided in Rajasthan and all of them wanted him back.

Like Rehman Khan, so has been the case of most other Rajasthani families. These families who are mostly street vendors and food sellers, live in rented houses at villages located close to the city such as Rammanahalli, Hullahalli, Kuderu and Mooguru while some stay in Nanjangud and distant localities of the city.

Among those sheltered include a couple of pregnant women and lactating mothers, a three-month-old infant, 22 children and 23 women. Although the District Administration is providing them food, they are finding it difficult to adjust to the food given to them as they are very much accustomed to their traditional Rajasthani food.

The Rajasthani families belong to Gadri Patel, Vaishnav, Rajput, Rawat and Daangi communities while some others come from Muslim community.

Meanwhile, the South Western Railways has clarified that the State Government is the final authority to decide as to who will travel in the special trains. “These are special trains planned for nominated people identified and registered by State Governments. No one under any circumstance should come to Railway Station looking for trains. We will not issue any tickets to any individual or entertain any request from any group or individual. We will allow only those passengers to board whom State Government officials will bring to Railway Stations,” clarified Chief Public Relations Officer, South Western Railway.