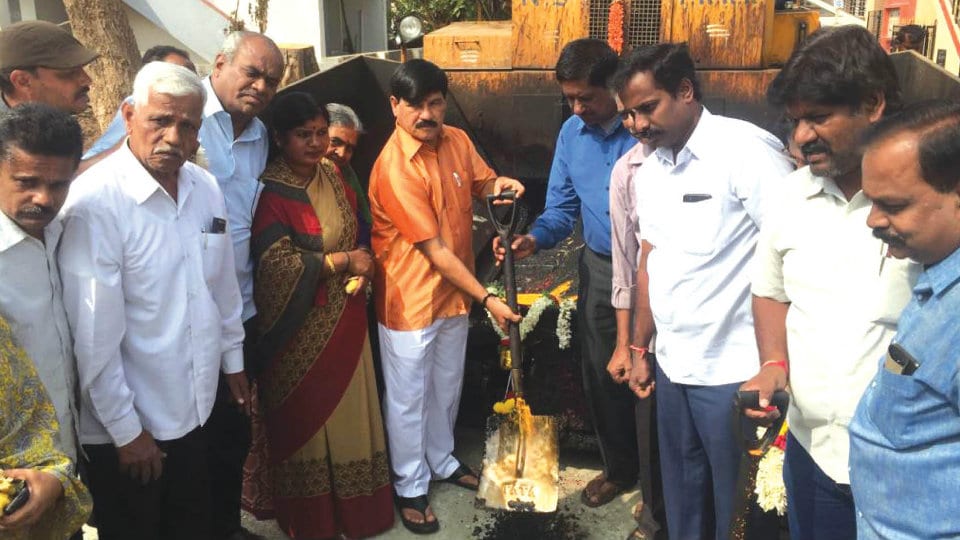 Mysuru: Former Minister and MLA S.A. Ramdas launched a slew of development works worth Rs.95 lakh in his constituency here this morning.

He launched the asphalting of roads worth Rs. 40 lakh in Ward No.51, opposite Chamundeshwari Temple in JC Nagar and then moved to MG Road near JSS Hospital where the drainage work worth Rs. 5.5 lakh began. The rainwater here was not flowing into the drain properly and hence there was a demand to set it right.

In Revenue Layout, JP Nagar, Ward No.62, where even the metalling of road had not been done since the last 20 years, the work on metalling and asphalting at a cost of Rs. 45 lakh was launched. In all, 10 cross roads and one main road are being asphalted here.

The residents on H.D. Kote Main Road and Nanjangud Main Road complained that the roads were in bad condition and debris was being dumped  on these roads. Ramdas directed the officials to clear the debris immediately.

In most of the areas, the common demand was for LED street lights. Corporators B.V. Manjunath, Chayadevi and Shantamma Vadivelu, BJP leaders Balakrishna, Dinesh, Devaraje Gowda and others were present.