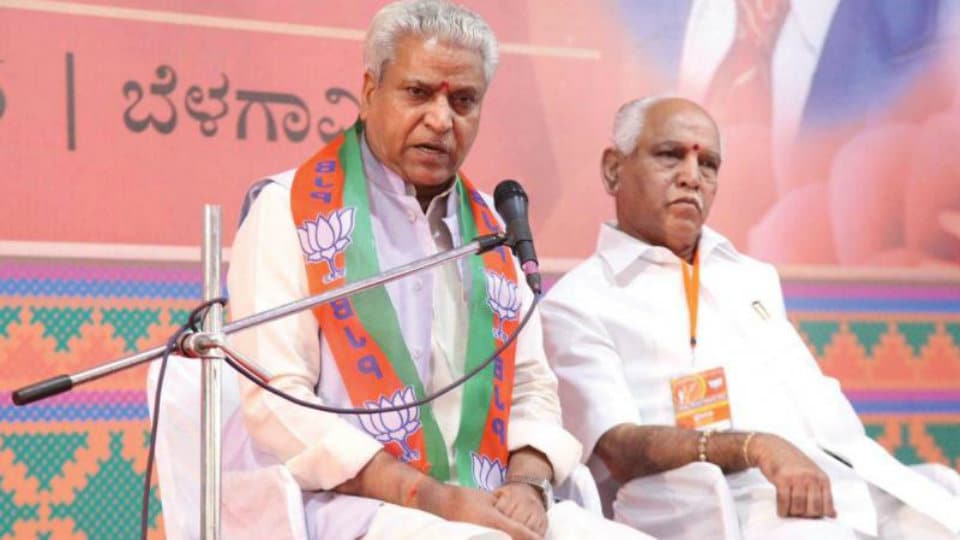 Bengaluru: Concerned over the increasing rift among top leaders in the State BJP, the BJP top brass is said to have asked the party’s National Organising Secretary Ramlal to put an end to the crisis.

Based on the instruction of National BJP President Amit Shah, Ramlal has asked the party’s Karnataka in-Charge Muralidhar Rao to send a report.

Muralidhar Rao, who landed in Bengaluru in the night, immediately called the State office-bearers to the BJP Headquarters in Malleswaram and held one-on-one discussions. According to sources, Rao wanted to know what triggered the fresh bout between BJP President B.S. Yeddyurappa and senior party leader K.S. Eshwarappa so soon after Shah had come up with a patch-up formula in January.

Some functionaries close to Yeddyurappa said Eshwarappa’s tirades were casting a shadow on the party’s prospects in next year’s Assembly election.

They also want Eshwarappa to be sacked as the Leader of the Opposition in the Legislative Council as he has been misusing his position to carry out a campaign against the State party Chief.

Others endorsed Eshwarappa’s view that Yeddyurappa was taking unilateral decisions, which has brought down the morale of party workers. Prominent among those who got individual time with Rao were R. Ashoka, Ayanur Manjunath, C.M. Udasi, B. Sriramulu, Ravi Subramanya, D.S. Veeraiah, Bharathi Shetty, Belur Gopalkrishna and former Tumakuru MP G.S. Basavaraj, according to sources.

It is learnt that Rao will hold much wider consultations on Sunday by inviting Presidents of various Morchas and prominent leaders from districts.

Meanwhile, Yeddyurappa, who participated in the Basava Jayanti celebrations on Saturday morning at New Delhi in which Prime Minister Narendra Modi also participated, could not meet party Chief Amit Shah and National General Secretary (Organisation) Ramlal as they were in Jammu and Kashmir.

Yeddyurappa returned to Bengaluru from New Delhi on Saturday evening, did not meet Rao and left for Shivamogga later in the night. Yeddyurappa’s supporters have alleged that the party’s National Joint General Secretary (Organisation) B.L. Santosh was behind Eshwarappa’s rebellion and his (Eshwarappa) continued criticism of Yeddyurappa’s style of functioning. Rao, after meeting the State party functionaries, will submit his report to Amit Shah sometime next week, it is learnt.

Even as Muralidhar Rao began the consultation process by holding a meeting with prominent office-bearers at the State BJP headquarters here last night, Rao in a late night development, is said to have sacked State BJP Vice-President Bhanuprakash and former party Treasurer Nirmal Kumar Surana who belong to Eshwarappa faction and Yeddyurappa’s supporters — party State Spokesperson G. Madhusudan and State BJP Raitha Morcha Vice-President M.P. Renukacharya from their posts, as a warning to the warring factions.