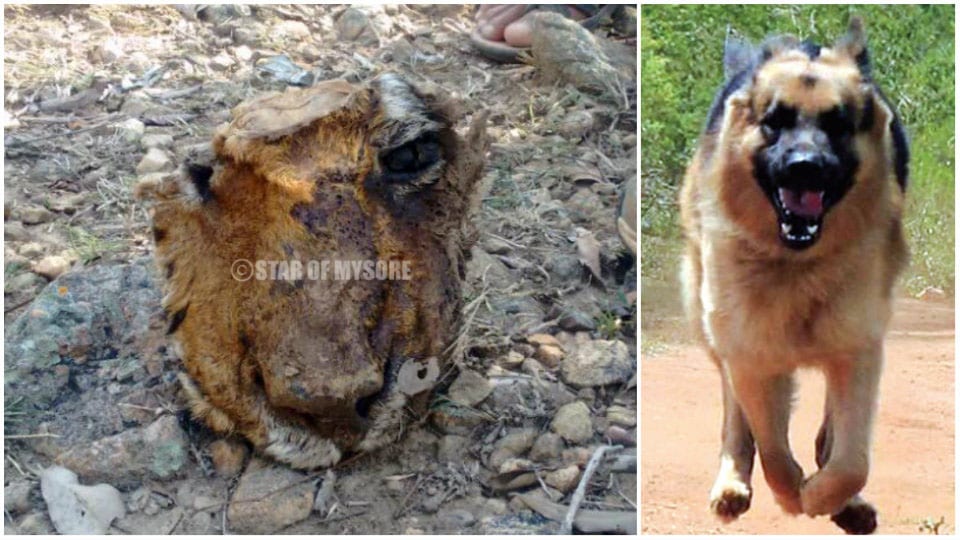 Gundlupet: Rana, the German Shepherd sniffer dog at Bandipur, which has created terror among poachers and smugglers, has traced the missing tooth of the celebrity Tiger Prince (14), which was found dead under mysterious circumstances with its face chopped off in Lokkere range in Bandipur.

Rana, which was inducted into Bandipur Forest Department to protect the forest from poachers, was successful in nabbing timber smugglers and poachers by going straight to their houses and thus helping the officials.

It may be recalled that the carcass of Prince was found recently with its face missing. While some said that Prince had become a victim of poachers, who had planted a meat bomb and met its tragic end when the bomb exploded inside the mouth, the forest officials were not ready to accept the theory that Prince may have been killed by poachers.

They argued that Prince had died a natural death and that some animals may have mauled his dead body causing injuries of its face and head.

Prince’s carcass strongly hints that he may have fallen prey to poachers’ traps as there were injuries only on his head, typically caused due to an explosion and his body was intact.

But experts say that it is unlikely that wild animals may have mauled Prince’s carcass, mainly because the meat of tiger has a very strong, pungent smell making it difficult even for wild animals to consume.

Further, if wild animals had mauled Prince’s carcass, it is a far possibility that they may have only eaten away the face leaving the body as it is. The missing snout portion of Prince was also found later.

Following the mysterious death of Prince, wildlife lovers had staged a protest in Bengaluru and other places also, demanding a thorough probe into its death.