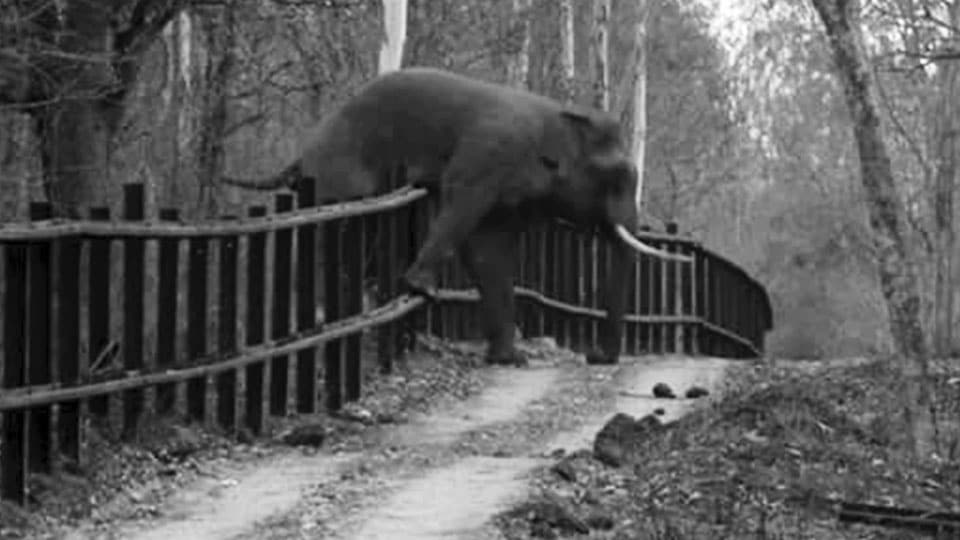 Bengaluru: Following the publication of a series of photographs of a jumbo crossing over the iron railing fence at Nagarahole Reserve Forest in newspapers and the pictures doing rounds in the social media, the Forest Department has decided to increase the height of the existing 10 ft tall fence by a foot by adding solar fence.

Sources said that about 22 kms of iron rail fence had been erected in Nagarahole, out of which 50% would be of 10 ft. height.

A Forest official said that elephants are very intelligent animals and are known to manoeuvre their way in the forest.

The official said that it has come to the notice of the Forest Department that this is the only tusker which crosses the iron rail fence and the photographs obtained from the camera trap also shows the same.

The official also clarified that the pictures showed the tusker returning to the forest and not going out of the forest as reported. He added that farmers of huge plantations on the other side of the fence have not complained of any crops being destroyed by elephants.

Meanwhile, an elephant expert said that the Department should try the Armstrong Elephant Trench model adopted in Addo National Park, South Africa, where in the last 64 years, only one elephant had crossed over.