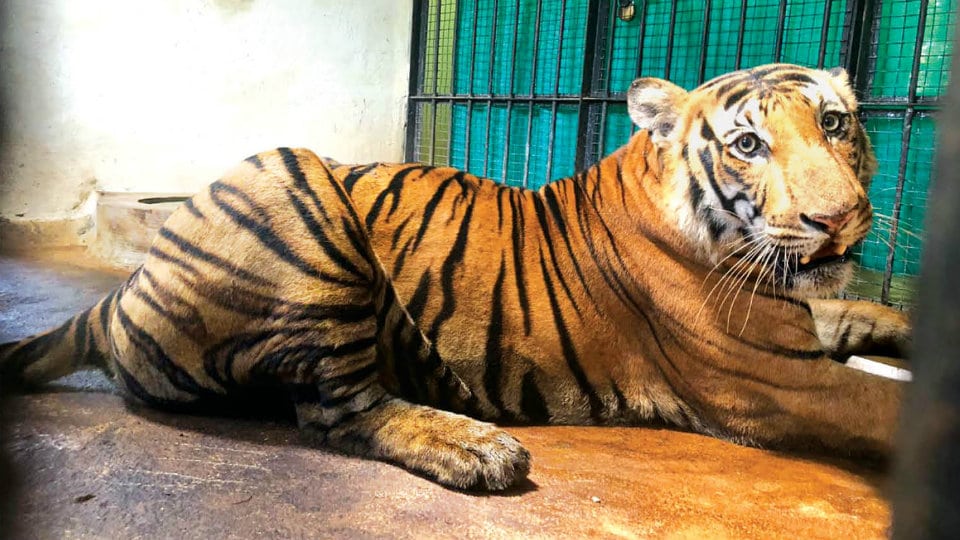 Melukamanahalli (Bandipur): After a massive operation launched since the last five days, Forest Department officials along with elephants, have finally caught the tiger which had killed two villagers and 18 cattle heads at Bandipur Tiger Reserve. The bag cat was trapped yesterday afternoon near Chowdahalli.

Senior forest officials said that the tiger was tranquillised at Melukamanahalli where the feline was hiding. Despite being tranquillised, the tiger, a healthy male aged about five years, ran away from the spot. Later officials traced it with the help of elephants. Department authorities had come under tremendous pressure to locate the wild cat.

The staff after much effort caught it in the cage and later shifted to Chamundi Animal Conservation, Rescue and Rehabilitation Centre set up by Mysuru Zoo at Koorgalli on the outskirts of Mysuru. The tiger had been initially mistaken for a four-year-old tigress.

Over 300 trained forest officials led by T. Balachandra, Chief Conservator of Forests and Bandipur Project Tiger Director, a contingent of seven elephants and a specially-trained German Shepherd dog named Rana were used by authorities to locate the tiger at the vast 872 square kilometre reserve.

Locating the big cat proved to be a huge challenge for authorities who faced angry protests from villagers. Villagers wanted the tiger killed. Officials, however, managed to secure the help of Soliga tribals in the area and used CCTV cameras fixed at strategic spots throughout the forest to locate the giant feline.

The effort made to find the tiger finally paid off when the animal was seen on one of the cameras at 4.45 am yesterday near Maguvinahalli. Three of the elephants and several officials finally found the tiger in the flesh in the afternoon at 2.15 pm in the same area.

“The tiger was captured late in the afternoon with the help of Soliga tribals, who spotted it hiding in a bush,” State Chief Wildlife Warden Sanjay Mohan, who was supervising operations from outside the forest, said.

“When the tiger was hit by a tranquilliser dart, it managed to escape into another bush. The Soligas proved crucial in spotting it again and hitting it with another dart to immobilise it,” he added.

He is a male of around five years and is healthy, weighing around 170 kg. The normal weight for his age and built is 140 kg. “The tiger ran into the forest and hid among bushes. At around 3.10 pm, he was traced and captured with  nets, after which the announcement was made. To ensure it was the right one, staffers compared the unique marks on the animal with camera trap images,” he said.

Forest Department Veterinarian Dr. D.N. Nagaraju said that yesterday the combing operation began around 8 am at certain places based on images captured by camera traps. Around 10.30 am, the distinct roar of a tiger hiding in bushes and 20 ft high grass was heard.

Led by mahout Vasanth, elephant Abhimanyu ambled close to the tiger. Dr. Nagaraj, Forest Guard Venkatesh and Akram Pasha, who were sitting on Abhimanyu, went near the tiger. The other two elephants stood back and waited. Akram Pasha took aim and fired a tranquilliser shot into the tiger’s thigh.

The angry feline tried to come near the elephants to charge but slowly, the sedation took its effect. It took more than an hour for the highly-potent drug to take effect and the big cat was seen prowling around in the area for some time.

They are expert animal scent-sniffers: Four Soliga tribals from BRT Tiger Reserve, who joined the search operation on Saturday morning, tracked its pug-marks from Antharasanthe to Maguvinahalli, where the animal was found resting in an abandoned field filled with grass.

The Soliga people are one among the few remaining forest-dwelling tribal people in and around the forests in Southern India. They live in settlements in and around the forests of B.R. Hills, M.M. Hills and Bandipur in Karnataka and in Sathyamangala forests in Tamil Nadu. Having lived here for generations, the Soliga people have an intricate understanding of the flora and fauna.

Soligas have a special skill and by smelling the air and identifying the pug-marks, they trace the tiger accurately. The Bandipur terrain is infested with lantana bushes and despite this, the tribal team successfully identified fresh pug-marks and guided the Veterinarians and forest officials to tranquillise the cat.

Feline in search of territory: Forest officials said that the captured tiger was a known male tiger which was once identified in Nagarahole a year ago. The tiger, in the last one year, had been wandering in search of territory through several forest ranges and ended up in the buffer area of Gopalaswamy Betta Range in Bandipur. Officials, who verified their database for the authentication of the big cat, said that it was the same tiger that was previously camera-trapped in Nagarahole Tiger Reserve near Dammanakatte (Kabini) in Antharasanthe Range.

Forest officials said the tiger was looking for a new territory and food. He was pushed out of every place by other tigers and had found solace at the border of Gopalaswamy Betta range, near Maguvinahalli and Hundipura villages. He was hunting cattle and camera trap images confirmed that the tiger mauled its victims out of fear, and there is no ground to call it a man-eater, officials said.

* In all, there were five teams on ground and over 300 staffers