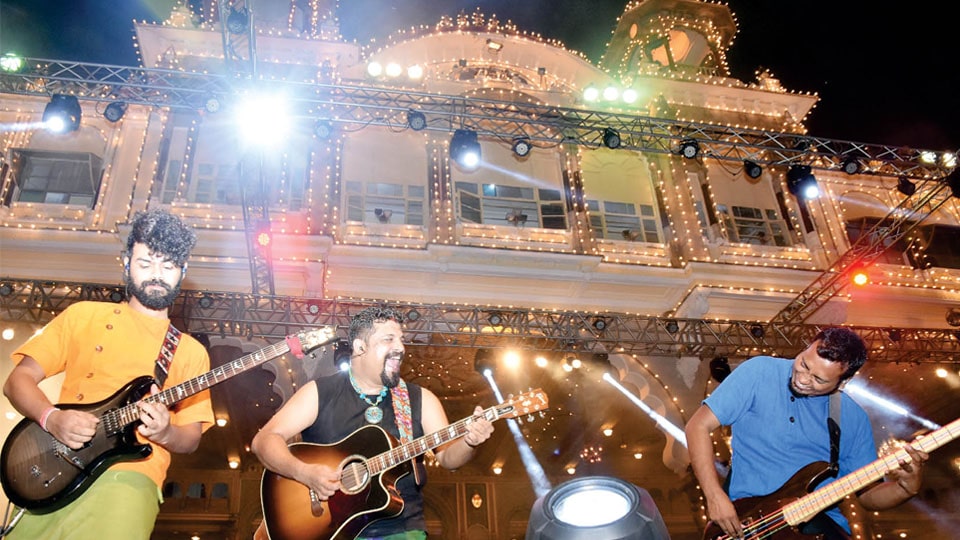 An unplugged concert by Raghu Dixit

Mysuru: Renowned folk-rock musician Raghu Dixit, who has carved a niche both as an independent musician with his band, the Raghu Dixit Project, and as a composer in various film industries of the country, performed at the  Mysore Palace last evening, setting the stage on fire.

Vividly thrilled with the melodious atmosphere, audience danced in joy during the concert that was held amidst cool breeze and moonlight and in the backdrop of illuminated Mysore Palace. It was a unique blend of intricate acoustic guitar and tatva padas — spiritual poetry of Saint Shishunala Sharif. In all, it mesmerised the audience.

The Evening of Contemporary Music was organised by Srikantadatta Narasimharaja Wadiyar Foundation as part of Birth Centenary Celebrations of Sri Jayachamaraja Wadiyar.

The musical night began with a rocking note with melodious ‘Kande Kande Naa, Kande Parashivana’ to which artistes from the dance troupe ‘Aayana’ danced to the tune. This was followed by another popular poetry of saint poet Sharif’s ‘Kodagana Koli Nungitta Nodavva Thangi.’

Raghu was wearing his signature style colourful lungi. Audience joined the chorus and hummed along with the singer on stage for ‘Lokada Kaalaji Maadutteenanti,’ one more popular poetry of saint Sharif and later ‘Gudu Gudiya Sedi Nodo.’

Raghu Dixit expressed his joy on the occasion for having his mother along with his Bharatanatyam teacher Nandini Eswer for the first time together among the audience and devoted the next song ‘Ee Tanuvu Ninnade’ to his teacher.

Later, Kiran Kaverappa’s ‘Alemaari Naa Alemaari’ followed by popular Hindi song from ‘Gully Boy’, ‘Jeevan Jeevan Dariya Dariya’ which was blended with Kannada song ‘Olave Jaari Jaari’ to which the crowd got off from seats and started dancing to the beats. Naveen and John accompanied the singer on violin with Akshay on bass guitar and Joe Jacobs on the drums.

Expressing his unbound joy, Raghu Dixit said, “I am a Mysurean and I am delighted to be here on the stage performing at Mysore Palace. This is a dream-come-true moment for me and I am thankful for the opportunity.”