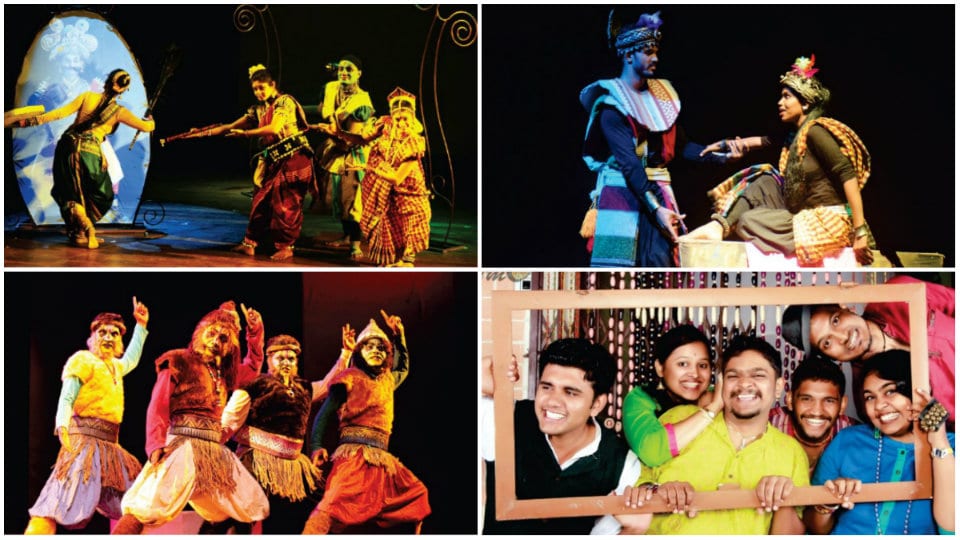 Rangavalli has invited three theatre groups from Bengaluru, Haveri and Udupi which will be staging plays at Kalamandira.

Apart, from theatre activities, Rangavalli has also organised musical concerts including rock fusion and Karnatak Classical music to spread the essence of music among the audience. There will also be book exhibition, painting exhibition for the art connoisseurs to enjoy.

The festival will be inaugurated by renowned theatre personality Dr. Vijayamma at a function to be held at Maneyangala in Kalamandira at 4 pm on Oct. 4. Kannada and Culture Joint Director Mallikarjunaswamy and Assistant Director H. Channappa will be the chief guests.

Columnist B. Chandregowda will preside. Rangavalli’s Founder-Member Raviprasad will be present. Note: Tickets are priced at Rs. 50 for each play.

About the Play: The play presents a fictional incident after the coronation of Rama in Ayodhya. Due to the diabolic Chandranakhi, Ravana appears in Sita’s room. How and why does he appear? Who is Chandranakhi? Will there be a battle between Rama and Ravana again? All these questions are answered in the play.

In the background of society’s treatment towards women, it discusses the perspective of women towards men and vice-versa, women empowerment, freedom of expression and mainly the relationship between mother and child.

About the Play: The play is based on two verses from Kuvempu’s epic ‘Shri Ramayana Darshanam’ — namely ‘Poondenagniye Sakshi’ and ‘Nee Satyavratane Ditam.’ Original characters from Ramayana are reconstructed by Kuvempu on humanitarian grounds. This is a musical play. In a state of being where the turmoil between Ideal and Emotional selves exists, this play takes an age-old story and narrates it for the sole purpose of deepened love.

In a time period where English is dominating, a Kannada Epic is taken with a purpose to introduce it to the next generation and to emphasise the importance of relationships at the time when they have lost their values. The tyrant Vali from the Valmiki Ramayana, in his final moments, is transformed here into repenting for his attitude and yearning for love. Yakshagana, Kalari and Manipuri styles have been used for this play.

About the Play: We do a lot of things due to pressure of Ambitions. We do much more to cover-up those things. We wield sword in the process. It is then that our ambitions are tainted with blood and wounds. The self-inflicted wounds deform and disgustingly hit back at us. This is an adaptation of Macbeth by Shakespeare by the Jnanapeeth awardee Dr. Chandrashekhara Kambara.

Marikadu is a metaphor to current society as being a forest of the ‘Maari’ where the thirst for Power overcomes everything and gives way to endless battles, leading to numerous kills. In spite of this we still ‘progress’ towards the same Battle that has been happening since ages due to the hunger for power.