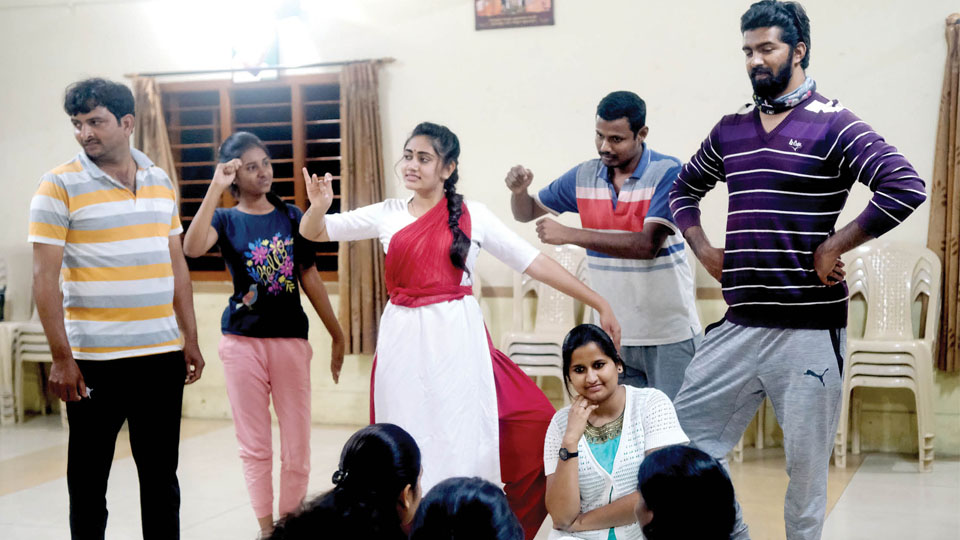 As part of its valedictory, Rangavalli has organised staging of Shakespeare’s “A Midsummer Night’s Dream,” directed by Ninasam graduate Jeevan Kumar Heggodu, from Mar. 3 to 6 at RamaGovinda Rangamandira in the premises of Nrupatunga School, Ramakrishnanagar.

Thinker P. Mallesh will be starting the proceedings by lighting the lamp on Mar. 3 at 6.30 pm. The play will begin every day at 7 pm and the tickets are priced at Rs. 100.

Bhoomika: In order to share and pass on the years of experience of Rangavalli to the younger generation, ‘Bhoomika’ Theatre Workshop is organised. First edition of the workshop started from this year and this will be an annual event henceforth.

Under the guidance of Jeevan Kumar Heggodu, a total of 34 students took part in the workshop. In order to introduce the great playwright William Shakespeare to the students, the play ‘A Midsummer Night’s Dream’ is being produced and staged.

At the wedding celebration, a play is to be performed, whose rehearsals are going on in the forest. In the meantime, Oberon and Titania, the king and queen of the fairies, are involved in an argument. Oberon sends his servant Puck on a secret assignment. An already confused scenario is further confused by an error caused by Puck during executing his assignment.

Confusion among the lovers arises that leads to chaotic scenarios. Everyone falls into this mix caused by Puck, which he himself will resolve. In the end, the happy couples unite.

Jayateertha Joshi: Jayateertha Joshi was born in Gadag on 23rd July 1956. He was into theatre since his childhood. After finishing courses at The National School of Drama (NSD) in New Delhi, he worked as Deputy Director of Rangayana. He himself was an eminent Director and an Actor. He has directed several plays including Tamrapatra, Mruchakatika, Nanda Bhoopati, Dharmapuriay Shweta Vrutta, GK Mastara Pranaya Prasanga, Vasamsi Jeernani, Doddappa, Paying Guest, Nijada Nele Nijakkalla and others. For Rangayana, he has directed famous plays Bhoomigeetha, Taledanda and other absurd plays. His plays were performed at various places. Joshi left for his heavenly abode on Nov. 16, 2002 at a very young age of 46.