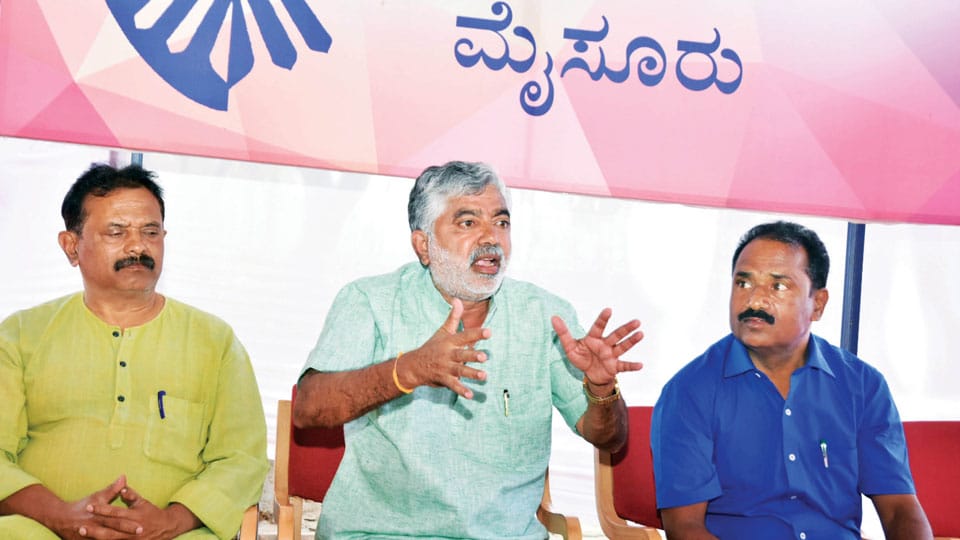 Rangayana is my only agenda, says Director Addanda Cariappa

Mysore/Mysuru: “I have come here to build Rangayana and further the cause of theatre, art and culture and not to hoist the flag of BJP or any other political and non-political organisations. Of course, the BJP Government has appointed me as the Rangayana Director. From the day I took charge, I have been tirelessly working with my teams and I will continue to strive for the welfare of Rangayana without any other agenda or ulterior motives.”

These were the words of Rangayana Director Addanda C. Cariappa who has successfully steered the 20th edition of ‘Bahuroopi’ organised by State’s premier theatre repertoire, Rangayana. The festival that began on a grand note on Feb. 14, hit crescendo on Feb. 15, 16, 17 and 18, to conclude on an even grander note last evening.

Addressing a press conference at Rangayana premises this morning, Cariappa said that he has been in the field for 40 years and he will go to any extent to fight for the cause of theatre and artistes. “I have not come here as a Director to build a fort around me and my thoughts. I have come here to continue the good work done by previous Directors and also to take Rangayana to newer heights,” he said.

“Bahuroopi, that earlier meant only for theatre groups, art lovers and intellectuals, now, is a festival of common man and people broke all barriers, shed inhibitions and openly participated in all the events and the packed audience at all the events is a proof for this,” he opined.

Cariappa said that when he took over as Rangayana Director, there were talks of holding this Bahuroopi in the name of Girish Karnad. “I told them that dedicating the festival to Mahatma Gandhi on his 150th birth anniversary was a befitting tribute to the great soul. Everyone agreed and I coined the phrase ‘Gandhi Patha.’ It immediately struck a chord and everyone worked together as one team to ensure the success of the festival,” he revealed.

Gandhiji was there everywhere, be it plays, seminars, venues, dance dramas, films, folk, cultural performances and even food and handicrafts. “This all-pervading and ubiquitous presence of Gandhiji was achieved with team work, support and participation. I did not differentiate between Left-leaning and Right-leaning thinkers. For me, all were equal. Before the festival began, I fell to the feet of many Gandhians in Mysuru and urged them to be a part of the festival. I visited Dalit Keris, congregations, temples and houses and pleaded them to participate. This paid off as there was overwhelming participation,” Cariappa said.

“Though there were attempts to disturb the festival and defame me initially, I extended open arms and invited them. I told them that my personal comments and Rangayana are separate, Kodavas are known to speak their heart out and I have done the same. I treated everyone equally with the principle of ‘Atithi Devobhava’ and the results are here,” he said.

“From the day I took over as Rangayana Director on Dec. 31, I began Bahuroopi work by conducting a series of meetings and by signing many files. I gave the push for the festival by forming various Committees and assigning responsibilities and together, we have achieved great success. From Jan. 1, every day I used to come to Rangayana at 6 am and be at work till 11 pm. I have not discriminated between any theatre groups and have earned the trust of all,” Cariappa added.