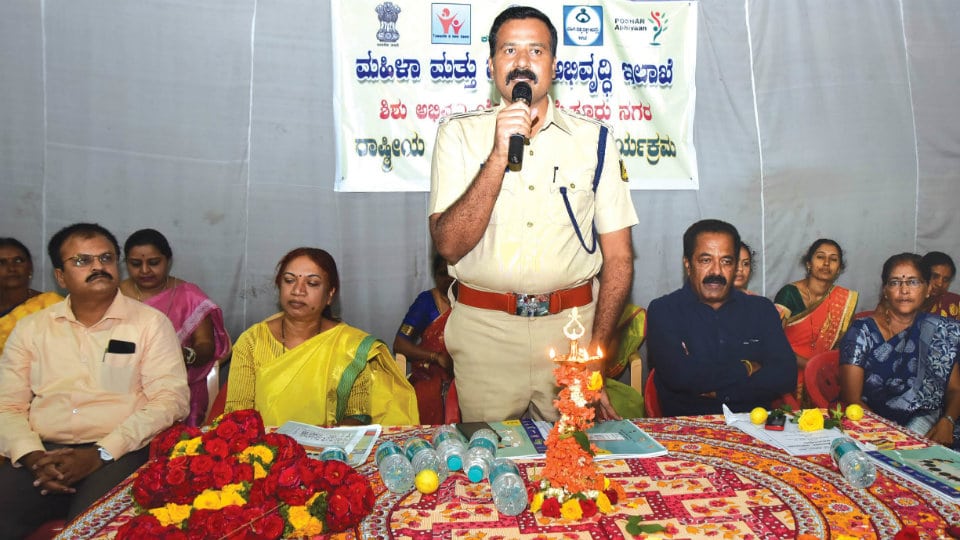 Mysore/Mysuru: Child Development Project, Mysuru, under the aegis of Women and Child Welfare Department, Mysuru, as part of Central Government’s ‘Rashtriya Poshan Abhiyaan’ (National Nutrition Mission), organised a one-day training programme for Anganwadi workers at Bal Bhavan, Bannimantap in city this morning, in which Anganwadi workers working in the city and at different taluk levels across the district took part.

“Anganwadi workers play a crucial role in the growth and development of both the mother and child. But these workers, unfortunately, are facing some issues and fighting for their demands because of some flaws in the system. I hope the administration would look into these issues and come up with an amicable solution in the very near future. I would advise you people not to lose patience,” the DCP said, addressing the Anganwadi workers.

Women and Child Welfare Department Deputy Director K. Padma, who presided over the event, also addressed the Anganwadi workers and briefly highlighted about 21 key points of the programme.

Speaking to Star of Mysore, Mysuru City Child Development Supervisor Bhagyashree said, “National Nutrition Mission is Government of India’s flagship programme to improve nutritional outcomes for children, pregnant women and lactating mothers. During this one-day programme, we will be training Anganwadi workers on various issues faced by women, in particular lactating mothers, malnutrition and ways to address this issue in a mission-mode. According to a report, 33% of mothers and children are suffering from malnutrition in the State. Our aim is to reduce this number in the coming years. We are conducting training programmes for Anganwadi and other health workers at least two days in a month.”