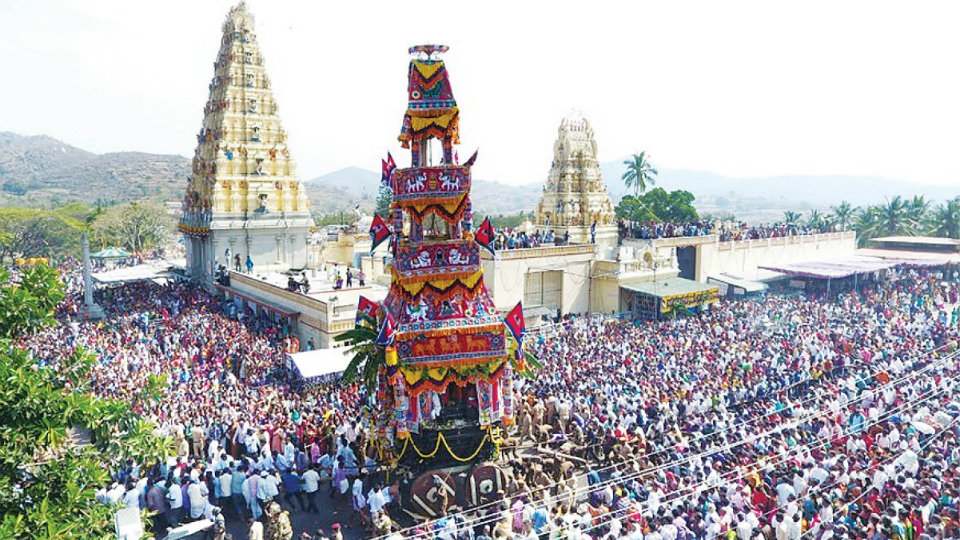 Rathotsava held amidst sea of devotees at M.M. Hills

Hanur: The annual Rathotsava that takes place every year during Deepavali was held amidst a sea of devotees at the famous Male Mahadeshwara Hills (M.M. Hills) shrine in Hanur taluk of Chamarajanagar district yesterday.

The grand Rathotsava took place in the auspicious time between 7.15 am and 9 am with all the associated rituals. The entire Hill wore a festive look. Even as the chariot carrying  the idol of the presiding deity Male Mahadeshwara went around the temple, the devotees chanted ‘Ughe Ughe Madappa.’

The  four-day jatra mahotsava atop M.M. Hills began on Saturday. On Sunday and Monday, various rituals such as Rudrakshi Mantapotsava, Hulivahanotsava, Basavavahana and Chinnada Terina Seve were held, during which the devotees fulfilled their vows by performing several sevas. The Mahotsava concluded with Teppotsava later in the evening.

Speaking to press persons after the Rathotsava, M.M. Hills Development Authority Secretary Jayavibhavaswamy said that over four lakh devotees  took part in the Jatra Mahotsava over three days and the Authority had made all facilities to the devotees.

Public toilets were built at nine spots and three makeshift toilets were also built. Adequate parking facilities were made and security was beefed up for the grand event, he said and added that the Authority was planning to extend facilities to devotees on the lines of  Tirupati.

The Uppara community members who carry the deity had refused to do so this time as their demands were not met. But the local MLA convinced them, following which they took part in the Utsava and carried the idol of the deity to the hill. After the rituals atop the hill, the idols of the deities were taken in a procession to several villages located in the vicinity. After the Utsava, prasada was distributed to the devotees.