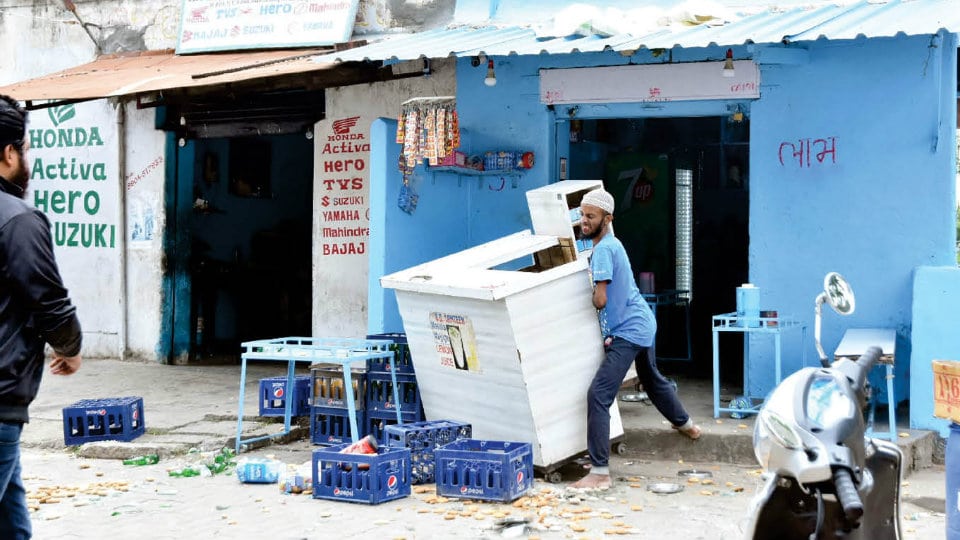 High drama on M.G. Road as man refuses to pay for tea

Mysuru: What do you usually do after you have a tea at a roadside shop? You pay and leave the place. But here is a man who broke glass biscuit containers, soft drink bottles, pushed the cash counter onto the road and at the same time picked up a broken bottle to threaten people who came near him. All this because, the tea shop’s staff asked for money for the tea he had consumed.

This rowdy-like behaviour was witnessed on Mahatma Gandhi Road at B.B. Canteen opposite a cancer hospital. The man, who created the ruckus on the road in full public view, is Khaleem, a resident of Kakarwadi near the tea shop. A regular visitor to the shop, Khaleem came to the outlet at around 7.30 am today and asked for his regular cuppa.

After having it, he left the place without paying money. He later returned to the shop and asked for another glass of tea. The staff asked him to pay for the first tea he had. They also asked him to pay the balance amount for the cigarettes he had purchased. Irked over this, Khaleem threw glass containers that had biscuits placed above the cash counter.

Not stopping at this, he threw a few soft drink bottles on the road. He later pushed the cash counter onto the road. Fearing that he will attack them, the tea shop staff went into a huddle inside the shop and ran outside later.

Mustering courage, the staff later tried to overpower Khaleem but he picked up broken bottle pieces and threatened to stab anyone who came near him. After Khaleem’s tempers cooled down, his two friends came on a scooter and made him sit on the vehicle to take him away from the scene.

Seeing this, people who had gathered there stopped the two-wheeler and beat up Khaleem. He tried to escape but was overpowered. The jurisdictional Lakshmipuram Police were informed and a Policeman took Khaleem to the Station on another two-wheeler.

Khaleem was provided medical assistance at K.R. Hospital. The Police, who conducted a mahazar, have registered a case against Khaleem and will produce him before a Court later in the day. There are possibilities of Police opening a rowdy sheet in his name, sources said.

2 COMMENTS ON THIS POST To “High drama on M.G. Road as man refuses to pay for tea”