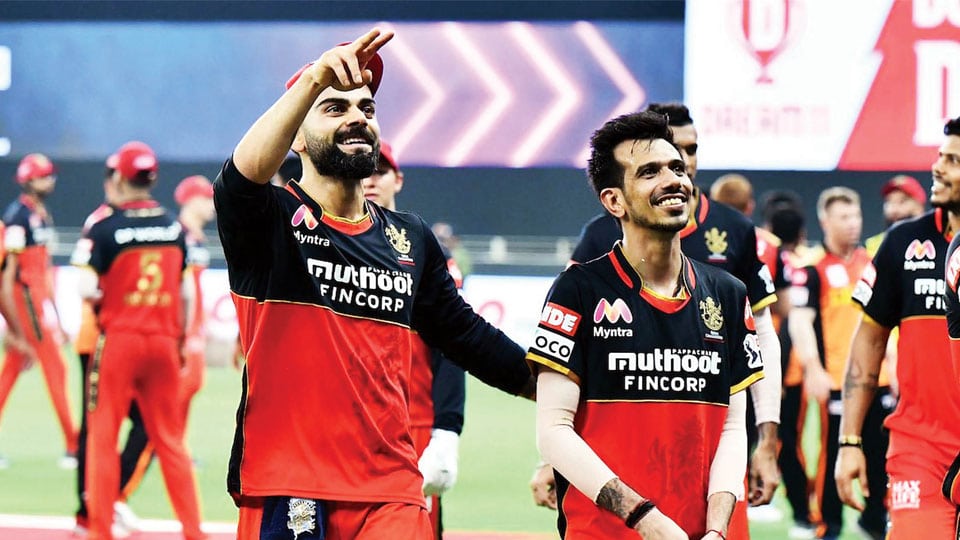 RCB kicks off IPL 2020 campaign with a win

Put into bat, RCB were off to a flying start. Devdutt Padikkal, making his IPL debut, hit two fours in the second over and followed it up with three more in the fourth over.

SRH were then dealt with an injury blow as Mitchell Marsh had to leave the field after bowling just four deliveries.

RCB then brought up their fifty in the final over of the powerplay before SRH bowled three tight overs, conceding just 15 overs. However, Aaron Finch hit a six and a four off Rashid Khan’s first over to push RCB to 75 at the end of the 9th over.

But SRH dismissed both the RCB openers on consecutive deliveries. First, Vijay Shankar disturbed the timber to end Devdutt Padikkal’s innings and then, Abhishek Sharma trapped Finch before the wickets.

Virat Kohli and AB de Villiers then added 43 runs together before T. Natarajan struck in the 16th over to get the RCB skipper out for 14. ABD, though, then cut loose to bring up his fifty and pushed RCB total past 160 before being run-out for 51 in the final over of the RCB innings.

Defending 163, RCB struck early, courtesy a stroke of luck as Umesh Yadav, on his own bowling, managed to deflect Jonny Bairstow’s shot onto the stumps to cut short David Warner’s stay in the middle.

Manish Pandey joined Bairstow in the middle and the pair added 71 runs from 62 deliveries before Yuzvendra Chahal dismissed Pandey for 33.

READ ALSO  RCB edges out MI in a Super Over-thriller

While Bairstow had a couple of reprieves, to his credit, he made the most of it, bringing up his fifty in the 14th over as SRH moved closer to 110.

At that stage, RCB needed a couple of quick wickets and they got what they were looking for.

With SRH needing 43 runs off 29 balls, Chahal struck twice. First, he got the better of well-set Bairstow, and on the next delivery, broke through Vijay Shankar’s defence to pick his third wicket.

There was another two-wicket over as SRH lost Priyam Garg, who failed to time his scoop shot and dragged a Shivam Dube delivery onto the stumps. In the same over, a mid-pitch collision with Rashid Khan, saw Abhishek Sharma lose his wicket.

Navndeep Saini then disturbed the timber twice as SRH lost Bhuvneshwar Kumar and Rashid in the 18th over.

While Marsh walked out to bat despite injury, Dube got him out on the first ball before Dale Steyn sealed the RCB’s win, dismissing Sandeep Sharma in the final.