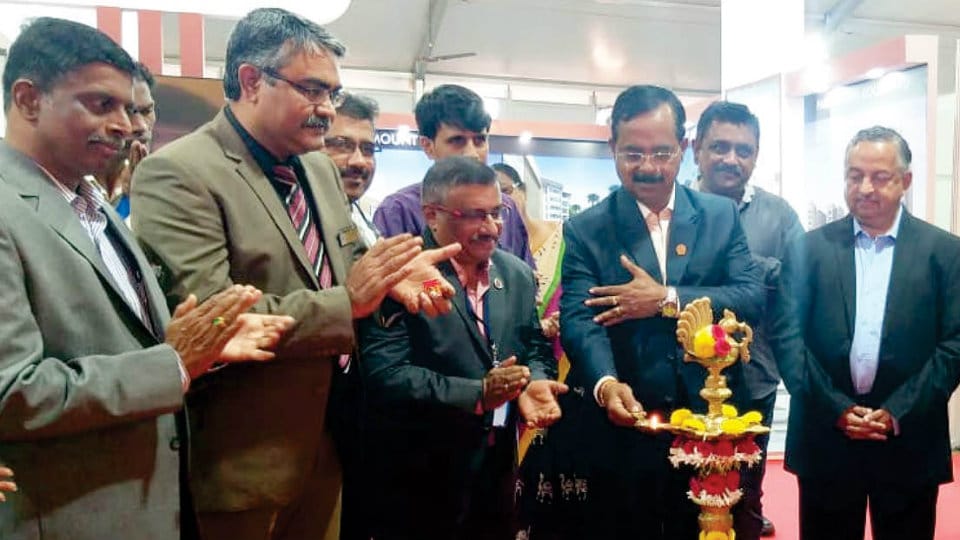 Mysuru: The real estate scene in city is really looking healthy, even as there is slump in many markets across the country. Like Mysuru, Hyderabad and Coimbatore have also bucked the trend, said Builders Association of India (BAI) National Vice-President K. Sriram.

He was speaking during the inauguration of MyRealty-2019, a Mega Property Show, organised by BAI, Mysore Centre and Confederation of Real Estate Developers Association of India (CREDAI), in aid of Mysore Builders’ Charitable Trust, here this morning at the Maharaja’s College Grounds.

The members of BAI had met Finance Minister Nirmala Sitharaman and Niti Aayog people in Delhi last week and discussed about the problems faced by the building industry. On Monday there was again a discussion with the Reserve Bank of India and the Finance Minister and her team and both listened to our problems and assured to solve them at the earliest, he said.

However, Mysuru, a tier two city, has bucked the trend and both the selling and buying of properties have seen an upward trend, said Sriram.

FKCCI (Federation of Karnataka Chambers of Commerce and Industry) President Sudhakar S. Shetty, speaking after inaugurating the expo, said that both GST and demonetisation had affected the real estate industry since the money circulation came down.

However, in the GDP (Gross Domestic Product) the major participants are the builders in the growth of the nation and the Finance Minister must factor this aspect and simplify the procedures to help the industry grow again, he said.

“If all business organisations and community come together on a single platform instead of working at cross purposes then both the State and the Central Governments will be forced to listen to us. In this endeavour, FKCII will always be with the BAI,” Sudhakar Shetty said

Over 30 stalls were set up at the expo where people were seen moving around stalls looking for the homes and flats of their choice.

There are also State Bank of India, Karnataka Bank and a few others offering flexible loans to buyers.