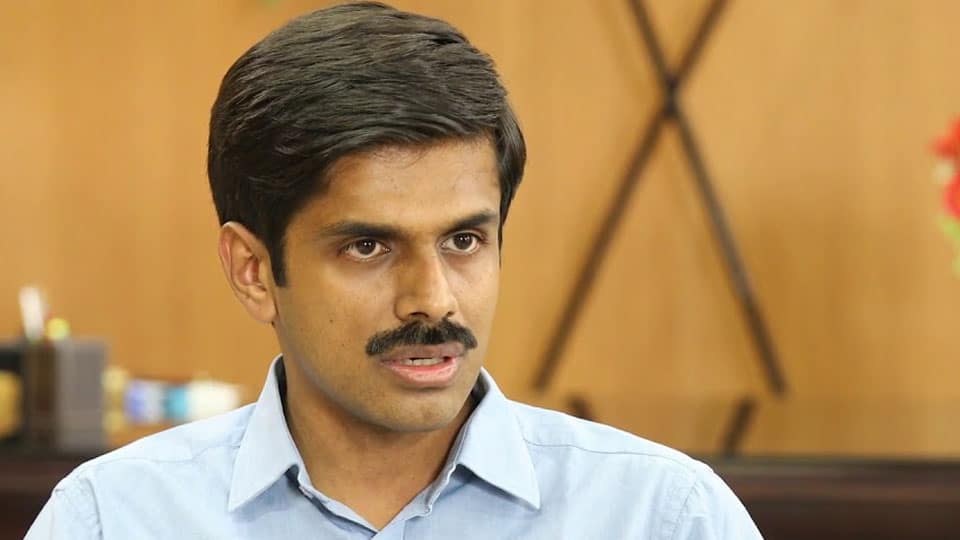 * Orders issued in the afternoon; revoked by evening after much lobbying

Even as the Dasara Gajapayana, heralding the 2019 Dasara, was being held at Veeranahosahalli yesterday, the DC was transferred. As soon as the orders were issued, rumours were rife that an influential Minister wanted the DC to be moved out of Mysuru. The Minister’s action was that of political upmanship.

But hours after the transfer, Krishnaraja MLA S.A. Ramdas used his good offices with Chief Minister B.S. Yediyurappa and managed to cancel the transfer. Ramdas told the CM that shifting Abhiram Sankar at this juncture when the Dasara season has just started would mar the festival organisation and would send a wrong signal to the public.

The orders to transfer the DC was issued by Government Under-Secretary to the Department of Personnel and Administrative Reforms Shakunthala Chougala and as per the orders, Nitesh Patil, Additional Commissioner, Commercial Taxes (Enforcement), Bengaluru, was appointed as Mysuru DC and Abhiram G. Sankar was to take over Patil’s place in Bengaluru.

But soon after the orders were issued, Ramdas intervened and convinced Yediyurappa to revoke the orders. Even Chamarajanagar MP V. Sreenivasa Prasad and Minister R. Ashoka also had apprised the CM to continue with Sankar as the Mysuru DC till the end of Dasara festivities.

Following the intervention, the CM telephoned Sankar and informed him that the transfer orders have been put on hold. The DC was told to continue his work as Mysuru DC.

Before the transfer episode unfolded, the ritualistic ‘Pushparchane’ or showering petals on the Gajapayana elephants was held twice at Veeranahosahalli. Though Yediyurappa had directed Minister Ashoka to participate in Gajapayana and had asked him to flag off the event, MLA Ramdas performed the ‘Pushparchane’ before the arrival of Ashoka.

It is a tradition that Mysuru District Minister always inaugurates the Gajapayana and will be a VVIP at the formal Dasara inauguration atop Chamundi Hill along with the CM and the State Guest.

Moments after Ramdas performed the ritual, Ashoka, accompanied by Minister V. Somanna, who has now been appointed as the Mysuru District Minister, arrived at the venue and Ashoka performed ‘Pushparchane’ again, raising brows.

However, as if to clarify his stand on the issue, Ashoka told reporters that he was not a competitor for Mysuru District in-charge Minister’s post. “I am peaceful in Bengaluru. No need to give a political colour to it. We all work together as common workers. MLAs Ramdas, L. Nagendra and others from Mysuru region will take the lead in Dasara celebrations,” he said.

Somanna also said, “Ramdas is a senior MLA from the region. We participated in the event as per the directions of CM Yediyurappa.”

Ramdas said, “Yediyurappa has sent Ministers Ashoka and Somanna as Government representatives and they have launched the event. We will work together for the success of Dasara. There is no connection between Dasara and District in-charge Minister. This is a State festival.”