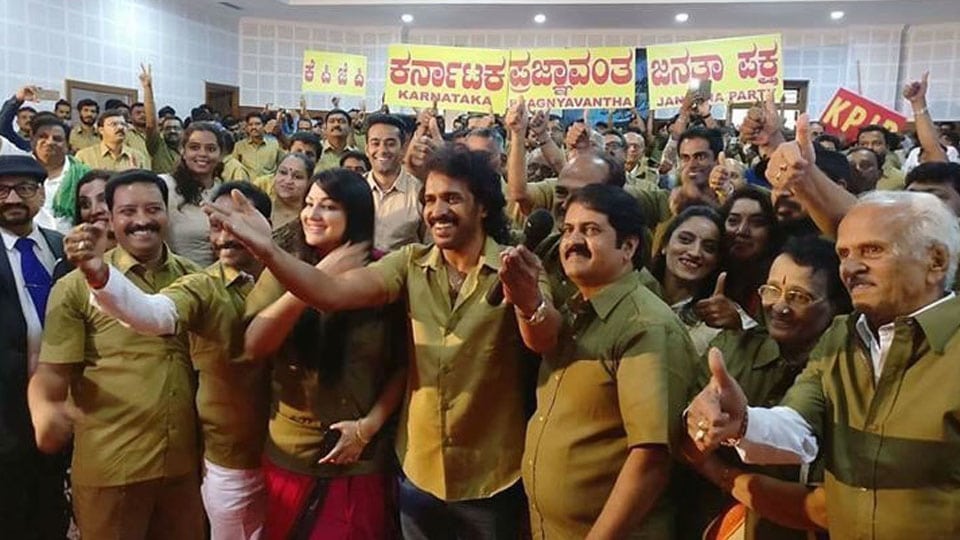 Bengaluru: Even as two top actors from Tamil Nadu — Kamal Hasan and Rajinikanth — are keeping people guessing on whether they will enter politics, Kannada’s “Real Star” Upendra took a real plunge into politics with the launch of ‘Karnataka Prajnavantha Janata Paksha’ (KPJP) in Bengaluru this morning.

KPJP was launched today amidst cheers from his hundreds of supporters. Interestingly, Upendra and his supporters were wearing khaki shirts, trousers at the launch event.

Upendra (‘Uppi’ to his fans) is known for movies like ‘A,’ ‘Super,’ ‘Uppi2,’ ‘H2O,’ ‘Auto Shankar’ and ‘Raktha Kanneeru,’ which are filled with political innuendos and utopian ideals. Now, he is set to tackle such issues in real life as well with the launch of his party, one that he says will be based entirely on democratic values.

In the election-bound Karnataka that will see a tough three-way battle between BJP, Congress and JD(S), Uppi’s foray will add a new dimension — and is even being seen as a fourth front on the lines of Aam Aadmi Party in Delhi.

Karnataka Prajnavantha Janata Paksha Upendra
Kurubarahalli Sy. No. 4 and Alanahalli Sy. No. 41: With no help from CM, residents to seek help from the Law Court
Rajyotsava: Dist. Minister to unfurl Kannada Flag