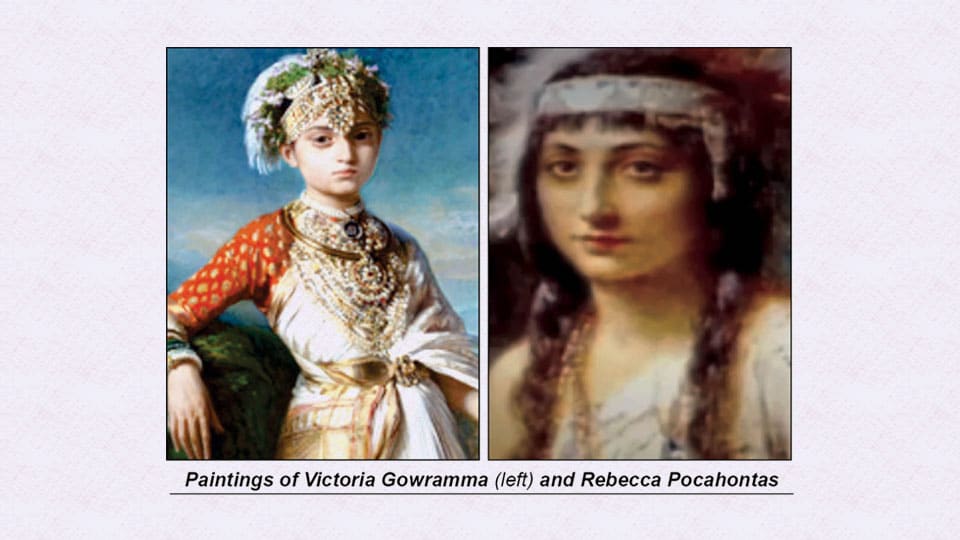 Pocahontas, the beau-tiful daughter of the American Indian chief of the Powhatan Confederacy, was born in 1596 in what is now known as Jamestown, Virginia, in the USA.  Her rank was that of a Princess. 16th and 17th century saw rapid colonisation of the Americas by the European nations.  History is replete with the brave fights the native Americans put-up against the white man who came with superior weapons and technology, and ultimately subdued the original inhabitants.

Years later, during the first Anglo-Powhatan war in 1613, Pocahontas was taken hostage by the British.  During this period, she was taught English and the scriptures in more detail. Soon her indoctrination was complete. In  1614 Pocahontas was baptised and was given the name Rebecca.

Fast forward to 1852.  The 11-year-old Gowramma, the favourite daughter of the last Raja of Coorg, was taught English and the scriptures by the British during their exile in Benares. The Raja and Princess Gowramma land in Victorian England in 1852.  Presented at Queen Victoria’s court, the queen took the vulnerable Gowramma under her wing as her God-daughter and encouraged her baptism.  Gowramma was given the name Victoria.  Queen Victoria bestowed Gowramma with a rank equivalent to that of an European Princess.

When Victoria Gowramma was 19 years old, she got romantically involved with a British army officer: Lieutenant Colonel John Campbell, who had served in India.  He was a widower, and 30 years her senior.  They were married in 1860.

John Rolfe and Rebecca Pocahontas had a son named Thomas Rolfe.  In 1616, John Rolfe brought his wife and infant son to England. Pocahontas was presented at the court of King James I, where she was given a reception with protocol normally extended to a daughter of a king.

READ ALSO  The Day War was Declared on Coorg

Victoria Gowramma and John Campbell had a daughter named Edith Victoria.  Gowramma suffered from tuberculosis and succumbed to the disease in 1864 at the age of 23.

Rebecca and Victoria, separated by nearly 250 years, had uncanny similarities in their lives.