Home » COVID-19 » Recovered alcoholic helps others to kick the habit 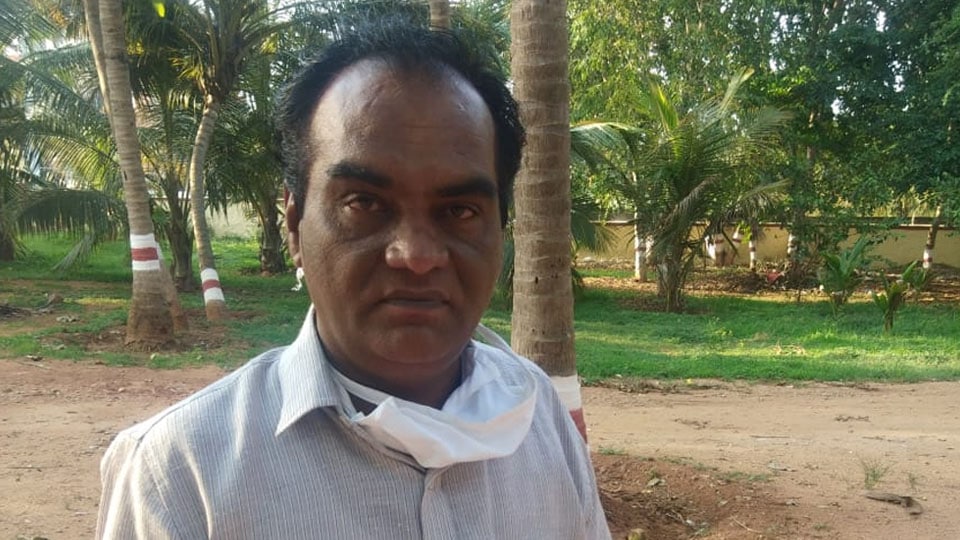 Recovered alcoholic helps others to kick the habit

Mysore/Mysuru: ‘Thiyagu’, a Tamil movie released in 1990, proved to be quite popular in those times. It was based on Tamil novel ‘Oru Manithanin Kadhai’. In that movie, the central character ‘Thyagu’, played by actor Raghuvaran, is an alcoholic and his life was ruined due to liquor addiction.

Born in a middle class family, the protagonist gets into the habit of drinking due to some family issues. The movie skilfully depicts the life of an alcoholic and its tragic end.

All alcoholics had a hard time due to lockdown. But on May 5, when the Government relaxed restrictions, liquor shops once again opened their doors. As a result, one could see people standing in serpentine queues to buy their favourite drink.

In contrast, here is a man who was once a binge drinker and now  helping others to quit the habit. A resident of Janatanagar in city, Devaraju was just another householder. For some reason, he got addicted to this habit. For him, every day began and ended with a drink. His alcohol abuse made him cold and meaner. As he started begging his friends for money, he became the target of ridicule. Finally, some of his friends admitted him to ‘Recovery Foundation’ at Mooganahundi near Mysuru for three months.

At the ‘Recovery Foundation’, Counsellors guided him to lead an alcohol-free life. Counselling sessions and support groups helped him to a great extent. After 90 days, Devaraju had a challenge that he never faced in life –– to lead a healthy alcohol-free life or pick up a bottle again. He wisely chose the former.

Devaraju tearfully says, “On that day, I decided that I will never again drink. As a result, I am now living a healthier and happier life with my family. I can still remember those days where I used to abuse my parents for no reason, all because of my addiction.”

“I decided help others at the same time. Now, I am working as a Counsellor for Recovery Foundation. Since 2014, I have counselled over 400 alcoholics. And of them, nearly 250 have quit this habit. For nearly 40-42 days, alcohol was not available due to lockdown. For about six weeks, most of them lived their normal life without a drink, but again, most of them have picked up bottles. I feel very sorry for them as this was a great opportunity for them to get rid of the habit,” he says. Devaraju did not forget to urge them to come out of this habit. “It is never late to mend our ways,” he adds.