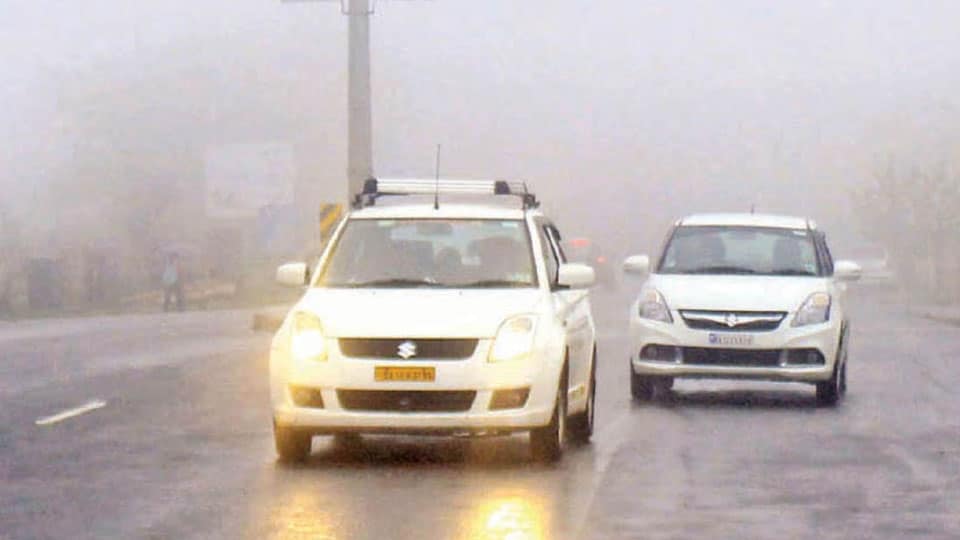 Reign of Rain begins in Kodagu

Movement of multi-axle trucks banned as they damage roads

Madikeri: Parts of Kodagu have been receiving intermittent rains since the last three days signalling the onset of the Southwest Monsoon. Though the intensity of monsoon is yet to set in, cloud cover and rainfall has been widespread and uniform across the district. And the weatherman has predicted more rains in the next three days.

This decision has been taken based on the report presented by the Regional Transport Officer who had recommended a ban on vehicles that weighs more than 16,200 kgs. The vehicles include multi-axle trucks and tankers, bullet tankers, ship cargo containers, long chassis vehicles and trucks transporting sand and wooden logs.

Moreover some villagers, who were affected by landslides last year, have demanded a ban on heavy vehicles. Villagers from Bettatturu, Kolagadalu-Cherambane-Bettatturu-Madenadu road said that heavy vehicles transporting timber ply on the road unabated as the road connects to the National Highway. Continuous movement of heavy vehicles has damaged the road that has led to landslides, they said.

The inflow into the Harangi reservoir is negligible as of now. The inflow was pegged at 76 cusecs on Tuesday whereas it was 4,780 cusecs on the same day last year. The water level of the reservoir was hovering at 2,804.92 ft. against the full reservoir level of 2,859 ft.

READ ALSO  Kodagu-origin doctor receives ‘Drive of Honour’ in US

As the rainfall is picking up pace, the State Government has been urged to shelve the plan of cloud seeding in Kodagu. The State Cabinet had decided to spend a couple of crores of rupees for cloud seeding. Residents and voluntary organisations have urged the Government to drop the plan as cloud seeding might result in more heavy rains like last year bringing untold misery to the people.

A natural disaster management training programme was inaugurated by Additional DC P. Shivaraju in Madikeri yesterday where he lauded the role played by Scouts and Guides and Rovers and Rangers during last year’s calamity. He said their services will be availed this year as well and urged them to coordinate with NGOs and volunteers in the relief centres in case of  any eventuality.

The training programme will be held for two days to equip the volunteers and NGOs on how best to deal with the situation in case of floods this year as well. Commissioner of Kodagu District Scouts and Guides Jimmy Sequeira said the District Administration has identified areas vulnerable to floods and landslides and teams of Scouts and Guides would be deployed in these places.