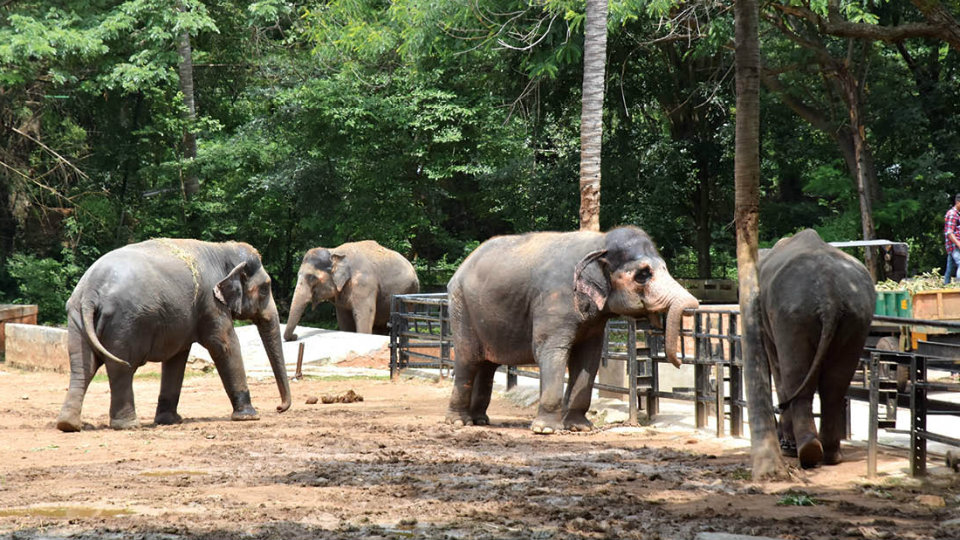 Mysuru: If tigers can get stressed due to gawking safari tourists close by, can elephants be far behind? Scientists at the CSIR-Centre for Cellular & Molecular Biology (CCMB) in Hyderabad have found that the elephants in captivity and used in religious and other activities like tourism and as workforce have high stress levels.

The study has rekindled the debate on whether jumbos should continue to be used in Mysuru Dasara. A few years back, the Karnataka High Court had constituted an Expert Committee to suggest means to improve the conditions of elephants in Karnataka. The Committee came out with a report, which was submitted to the State Government.

The Committee had recommended reduction of the use of elephants during Dasara and had asked the Government to conceive alternative plans for carrying the howdah on the day of Vijayadashami. The State Government, however, rejected the Committee recommendations on the grounds that it was a tradition followed for decades.

The study paper, which was published in the journal ‘Animals’, disclosed that elephants that were born in wild and females had significantly higher stress level when exposed to various physical activities and different husbandry practices.

Higher violence in the stressed animals has also resulted in human casualties too. Kerala, which has a long tradition of keeping captive elephants, witnessed 274 cases of manslaughter by captive elephants between 1989 and 2003 (an average of 10 manslaughters per year).

In an earlier study conducted by the same research group, it was demonstrated that chronic stress affected female reproductivity and cyclicity and thus reproduction process in elephants.

Scientists from CSIR-Centre for Cellular & Molecular Biology (CCMB) in Hyderabad had visited the Mysuru Zoo when Mallige Veeresh was the Chairman of Zoo Authority of Karnataka (ZAK). Speaking to Star of Mysore, Mallige Veeresh said that Dr. G. Umapathy, Principal Scientist, Laboratory for Conservation of Endangered Species, CCMB and his team of researchers had visited the City Zoo and had conducted a study. The team was in Mysuru for three days, she added.

The study recommended for minimising the participation of elephants in religious processions and Forest Department activities. It suggested that females with reproductive age (20 years to 55 years) should not be used for stressful activities and their reproductive cycles should not be affected. It also suggested that adult male elephants may be used for tourism and patrolling activities that involve three hours to four hours per day in the forests with adequate rest on alternate days.

The researchers recommended for periodic monitoring of health and reproductive status of elephants by outside experts.

“These findings through non-invasive techniques are important in better handling of domesticated animals and minimising their discomfort that we were earlier not even aware of,” said Dr. Rakesh Mishra, Director, CSIR-CCMB.