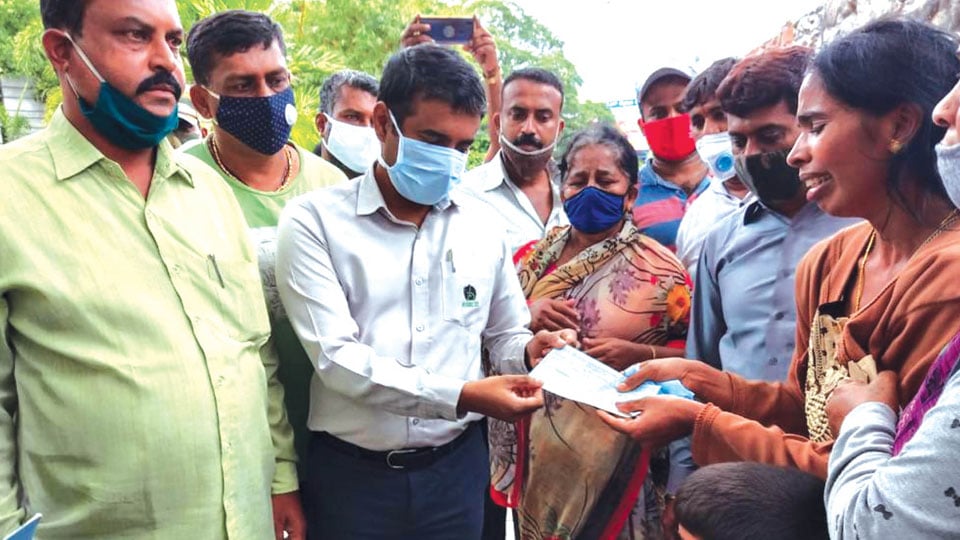 This is for the first time in the history of Mysuru Zoo that an elephant had killed its caretaker. Harish, the mahout of elephant 16-year-old Abhimanyu (Abhi), was gored and trampled by Abhi on Friday. He was working on contract basis. Post-mortem was conducted yesterday and the body was handed over to the family members. Last rites were performed at Lalithadripura in city.

When the Zoo staff paid their last respects to deceased Harish, his (Harish) family members demanded compensation and a job to Harish’s wife on compassionate grounds. The family members tried to stage a flash protest, but ZAK Member-Secretary B.P. Ravi and Zoom Executive Director Ajith M. Kulkarni, who had brought the compensation cheque of Rs. 10 lakh with them, handed over the same to deceased Harish’s family.

The officials explained to the family members that job on compassionate grounds cannot be given but could provide a job on contract bases on humanitarian concern for which permission has to be obtained from senior officials and the State Government.

Insurance facility: In a bid to help the Zoo staff sustain financially during accidents at work, Death-cum-Retirement Gratuity (DCRG) policies have been made in the name of employees. Hence, the family of Harish would be getting between Rs. 4 lakh and 6 lakh and also Rs. 1 lakh from the insurance.

Sixteen-year-old Abhimanyu (Abhi), was born to Ganesh-Padmavathi in the Zoo and is gentle in its behaviour.

On Friday, when Harish was tying female elephant Lakshmi, Abhi attacked Harish accidentally resulting in Harish suffering damage to his ribs, intestines and other organs. Though he was rushed to the hospital, he succumbed to injuries there.

After the incident, Zoo Veterinarians and senior officials began observing Abhi from morning to evening and confirmed that Abhi was not in musth and did not show any aggressive behaviour. He was in a depressed mood.

Abhi obeyed the commands of the officials and experts said that, looking at the behaviour of Abhi, it can be said that he (Abhi) had not attacked Harish intentionally. It is learnt that while Harish was tying the chain, Abhi had attacked him from behind.