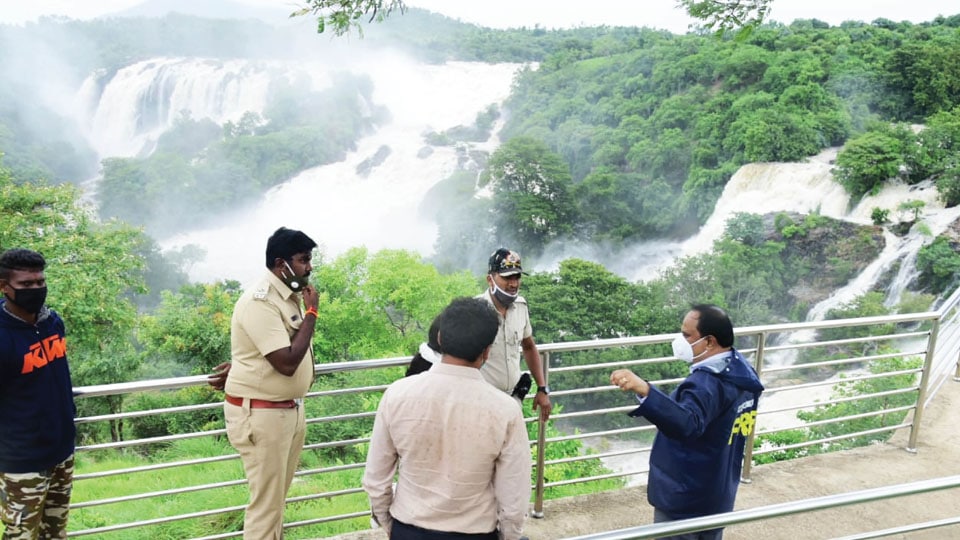 Chamarajanagar: The District Administration is planning to reopen the splendid Bharachukki Waterfalls which is in full glory for tourists following heavy rains and Deputy Commissioner (DC) Dr. M.R. Ravi along with officials inspected the place yesterday.

Bharachukki is one of the main tourist spots in the district, which attracts a large number of tourists during the season. But the tourist spot has been temporarily closed for tourists in the wake of COVID-19 pandemic. However, there is a proposal to lift the curbs on tourists and the topic of lifting the curbs on tourists was also raised and discussed during a meeting chaired by the District in-Charge Minister recently. Following the proposal, DC Dr. Ravi and other officials visited the waterfalls and conducted an inspection.

Topics such as precautions to be taken by tourists, measures to be taken for the protection of tourists, spots from where tourists could view the waterfalls, facilities to be provided for shops and vendors selling eatables, parking facility etc.  were discussed.

Speaking to press persons, Dr. Ravi said that a proposal to reopen Bharachukki falls to tourists had come up and hence an inspection was conducted. He further said that a decision in this regard will be taken in consultation with the Forest Department and other authorities concerned for which a meeting would be convened soon.

The DC later visited the Dargah in Bharachukki limits and conducted an inspection. He instructed the officials to get the iron railings installed to prevent tourists from venturing close to the waterfalls. He said that there is permission for devotees to pray at the Dargah but they (devotees) cannot stay back besides issuing instructions to maintain cleanliness and take all necessary health precautions.