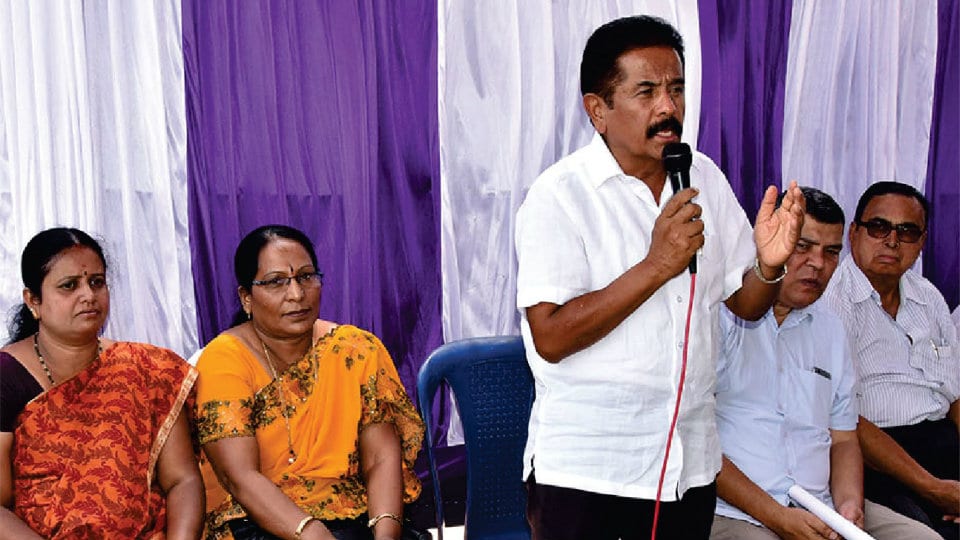 Mysuru: The people in the surrounding areas of Sewage Farm where the solid waste treatment plant is functioning can heave a sigh of relief as two more waste treatment plants will come up at Rayanakere and Kesare. Both have been accorded environmental clearance by the State Environmental Impact Assessment Authority, Karnataka, said MLA M.K. Somashekar.

He was speaking after being felicitated by Vidyaranyapuram Sewage Farm Residents Welfare Association here on Apr. 7 and said that since the environmental clearance has been given to set up treatment plants at Rayanakere and Kesare, the pressure on the Sewage Farm Treatment Plant will decrease.

The public in the area had to put up with the strong odour emanating from the treatment plant for years and they were demanding the shifting of the plant.

The waste that is collected over a period of 40 years can now be quickly distributed to the other two units thus mitigating the problems of the locals. However, a person who was an MLA for 15 years in K.R. Constituency and also the District-in-charge Minister had not made any serious effort to solve the problem and instead gathered school students to stage a protest and tried to misguide the people, the MLA alleged.

But due to the efforts of Chief Minister Siddharamaiah, who understood the problems oof thelocals, the environmental clearance was accorded, he said.

Meanwhile, former Minister  S.A. Ramdas, who spearheaded a struggle sometime back to put an end to the woes of the residents, has clarified as follows:

“An indefinite stir was launched to find a solution to the problems faced by the residents surrounding Sewage Farm as they had to bear the strong stench from the waste treatment plant for years.

At this juncture, previous DC D. Randeep visited the spot, understood the problem and assured to resolve it within a specific time besides informing of starting more waste treatment plants.

Since that was not possible, the issue went to the Central Pollution Control Board and the officials after visiting the spot gave accordance to set up two more units. This work should have been done by the present MLA, but instead, he is now claiming false credit.”