Home » News » Residents plant saplings only to be removed by MCC

Residents plant saplings only to be removed by MCC

Mysuru:  Chamaraja MLA Nagendra visited the Ground-level Water Tank Park at Vijayanagar First Stage this morning and expressed shock over the removal of saplings that were planted by Vijayanagar First Stage Residents Welfare Association. The MLA said that he will direct the Mysuru City Corporation (MCC) to replant the trees and restore the park.

It may be recalled here that the MCC Assistant Horticulture Officer (AHO) Muralidhar had ordered the removal of more than 60 fruit and flower-bearing saplings planted by the residents recently.

Upset residents had termed the MCC move inhuman. M.K. Nanjaiah, President, Vijaya Nagar First Stage Welfare Association said, “All these newly planted saplings were removed by MCC AHO Muralidhar. This shows the inhuman and cruel nature of MCC officers. What kind of example the staff is setting for the common people?”

The issue was brought to the notice of Chamaraja MLA L. Nagendra, who visited the park this morning. Spending more than one hour at the park along with over 100 residents, the MLA inspected the present state of the park. He expressed his unhappiness over Muralidhar’s move and told the residents that the trees will be replanted and he will ensure that the park is green once again. 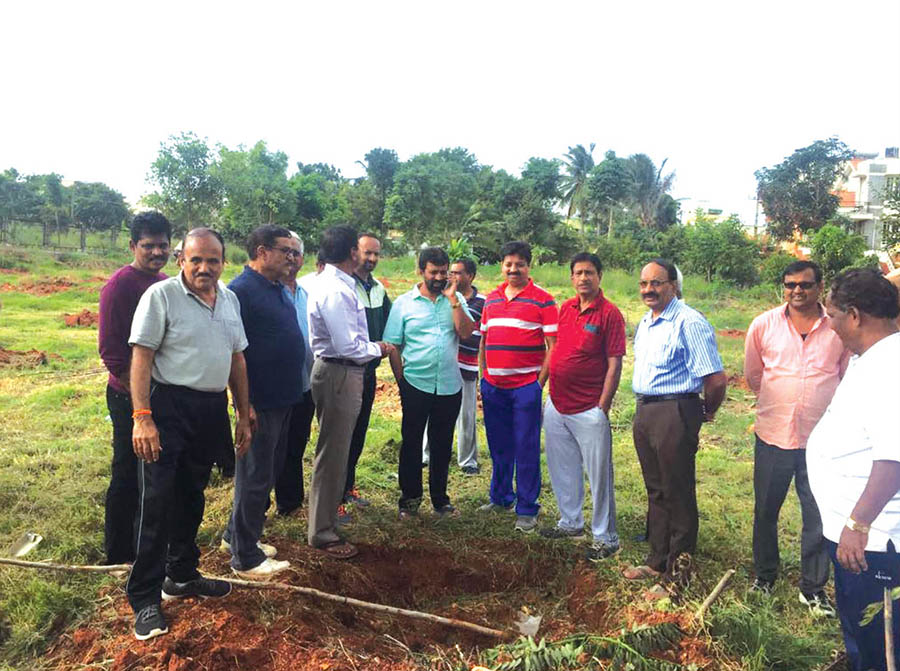 MLA Nagendra is seen along with the residents at the Ground-level Water Tank Park at Vijayanagar First Stage this morning.

The MLA had summoned AHO Muralidhar to the park but the officer did not turn up. When the MLA repeatedly called the officer over phone from the park, he kept on assuring Nagendra that he would come in a few minutes. However, the AHO failed to turn up.

The residents told the MLA that along with the support of Forest Department and local residents, the Association members planted saplings. “All these new planted saplings which were 5 to 6 feet high were removed by the Corporation staff. After seeing these saplings, they should have at least brought the issue to the notice of their higher-ups,” the MLA was told.

Justifying his action of removing the saplings, AHO Muralidhar said pits were dug indiscriminately inside the park, without obtaining permission from the MCC.

He further said that they contacted Association President Nanjaiah and told him that they could plan together and plant the saplings in a systematic way and alleged that they (Association) planted saplings as they wished.

“After planting saplings, tree guards should be installed for a year and saplings must be watered for a year. Nothing has been done only saplings have been planted. If the Association is concerned about the environment, let them adopt the park from the MCC and develop it,” he said.

Nanjaiah, however, denied Muralidhar’s allegations and said that shade-giving trees were procured from the Forest Department and planted systematically and not as alleged by the MCC officer. “The MCC, which is responsible for maintaining the green cover in city, has acted in a high-handed manner,” he said.