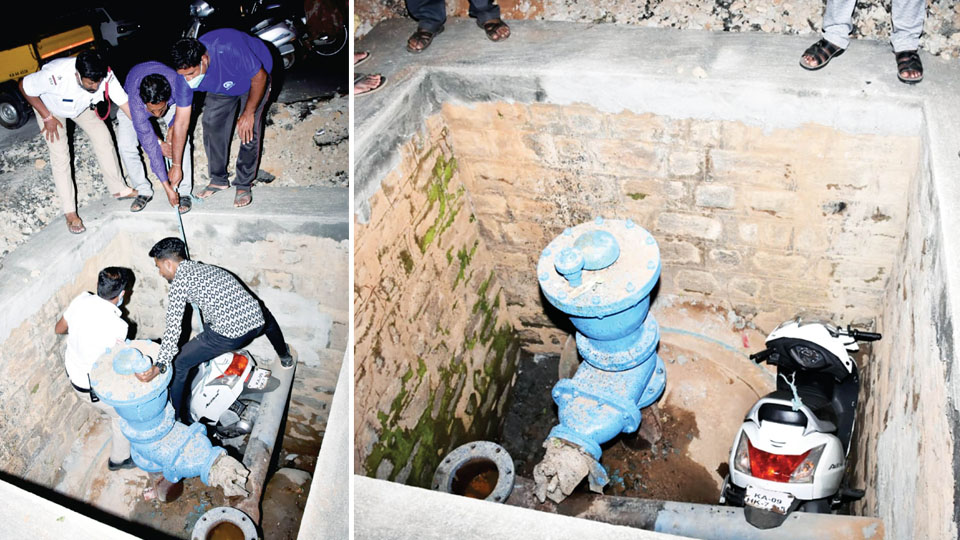 Mysore/Mysuru: A 59-year-old two-wheeler rider sustained injuries when the scooter he was riding fell into a roadside uncovered Water Valve Chamber on Dr. Rajkumar Road near Kalyangirinagar last night. There were also no caution boards or barricades put up to warn the motorists about the presence of the chamber.

The scooterist, Devaraju, a resident of Sathagalli was proceeding on the road from Yeraganahalli side towards Sathagalli at about 8 pm yesterday and when he came near the BSNL Office, he suddenly noticed the 6ft. deep Water Valve Chamber. In a bid to avoid falling into the chamber, Devaraju lost control of his scooter, which fell into the chamber. Luckily, he (Devaraju) fell on the road sustaining injuries on his face, hands and legs. It would have been fatal for Devaraju if he had fallen into the deep Chamber.

Meanwhile, members of the public, Siddarthanagar Traffic Police Assistant Sub-Inspector Raju and Head Constable Syed Noorie managed to lift the scooter from the Chamber and shifted the injured to a private hospital.

A few residents alleged that the earth which was excavated for asphalting the road recently has been dumped on the open space which was used as a playground and the excavated earth is dumped to such a height that it was blinding motorists who are unable to make out vehicles plying on the main road, which could also lead to accidents.

It may be recalled that similar absence of warning signs or barricades near the Reserve Bank of India (RBI) at Belavatha had resulted in a car falling into a roadside pit which was allegedly dug up by the Railway Department last year.

A biker too had fallen into an open pit in Yadavagiri, dug up by Optical Fibre Cable laying firms injuring himself following which MCC issued an order stopping all cable-digging works in January this year.