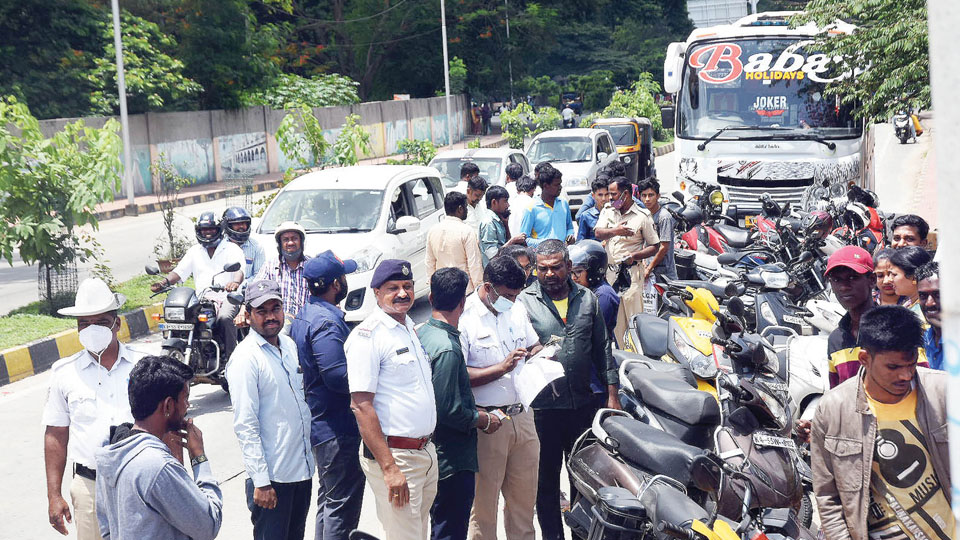 The Cops are trying to apply brakes on violations such as triple riding, helmetless riding, speaking over phone while driving or riding, drunk driving and signal jumping among other violations that were snuffing out lives and leaving many permanently disabled.

On May 23, the Traffic Police have booked a total of 246 cases against offenders which include 218 helmetless riding, 25 triple riding and three defective silencer cases. Today from 10.30 am, the Traffic Police were seen conducting checking drives on all major roads and junctions, Circles and other spots.

Many motorists were seen taking a ‘U’ turn and using alternate routes to avoid checking.

“We want motorists to understand the importance of following traffic rules. We want to make them understand the importance of life. Our motto is to save lives not just impose fines, register cases, seize vehicles or impound the Driving Licence of traffic rule violators,” Dr. Chandragupta said and added that such checking drives will continue in city besides urging motorists to follow rules and avoid being penalised.

It may be recalled, in a bid to regulate vehicular traffic, to ease congestion, as well as to sensitise motorists on various traffic rules at major junctions and Circles, the City Police had launched a Public Address System traffic awareness drive a few years back.

A Public Address System, comprising microphones, amplifiers, loudspeakers and related equipment were installed in all major Circles and a Traffic Police Constable was making mike announcement on all traffic violations. The Traffic Police, who arrive on major roads and prominent Circles daily at 8 am, used to alert motorists about traffic rules by making mike announcements. They also used to caution riders without helmets, speaking on mobile phone while driving, carrying more than three people on two-wheelers, pedestrians trying to cross at Zebra Crossings even if there is no signal, motorists jumping red signals and other such traffic violations.  Despite such initiatives, most of the motorists are violating the rules, which has prompted the Traffic Police to initiate stringent action against them.

4 COMMENTS ON THIS POST To “Rise in traffic offences: Cops intensify checking”