Home » News » Road Humps and Potholes: A Nightmare for Motorists 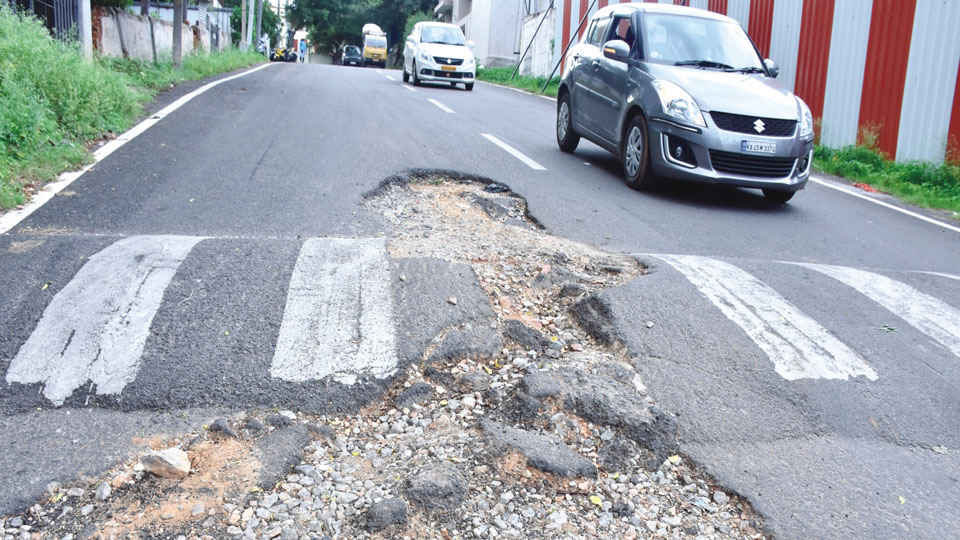 Road Humps and Potholes: A Nightmare for Motorists

Mysore/Mysuru: Unscientific humps, especially those on poor lit roads, cause fatal accidents. Two-wheeler riders are most prone to such fatality. Many two-wheeler accidents, injuries and deaths in city are caused by badly built road humps. Added to this, the rainy season has created a number of craters and gaping holes in these poor quality roads.

Road hump opposite Prajapita Brahmakumari Ishwariya Vishwavidyalaya: “If vehicle riders have to travel on the road opposite Vikram Jeev Hospital, they have to ride on the right side of the road. There is a huge road hump opposite Prajapita Brahmakumari Ishwariya Vishwavidyalaya and road repair work is going on at the same site because of which a huge pothole has been created. MCC has to fill this crate immediately. Otherwise, riders travelling on this downward sloping road while taking turn to the right side might fall and get injured with fatal consequences,” says Venkatesh, a two-wheeler rider who commutes on this road more frequently.

Kamsale Mahadevaiah Circle: Speaking to Star of Mysore, auto driver Ravichandra said, “It has been four or five months since completion of UGD pipe laying work at Kamsale Mahadevaiah Circle located near Elethota. Even after its completion, they have not asphalted this road and hence, vehicle riders are finding it difficult to travel on this road.”

“All the roads surrounding this Circle including Ramanuja Road, Basaveshwara Road and the road leading to Sewage Farm have a number of potholes which is causing a lot of inconvenience for motor cyclists and pedestrians. Over the last two to three months, 10 to 15 accidents have happened because of this reason,” he said.

JLB Road: “There are nearly 15 large potholes on Jhansi Rani Lakshmi Bai (JLB) Road. One on the road connecting Agrahara to Manandavadi Road and another one next the road hump opposite Sri Nadabrahma Sangeetha Sabha has caused a lot of trouble for riders and many accidents have happened because of this,” said roadside vendor Rukmini.

Manjunath, an employee working in a private company, also added, “due to heavy rains, sand and mud has collected on the road at Vedanta Hemmige Circle near the crossing towards Agrahara and as a result, vehicle riders, especially two-wheelers have slipped and fallen. I would request authorities to clear this place of sand and mud.”

Marimallappa’s College: “UGD cable and KEB wire laying work has been going on near Gurikar Mallappa Circle located opposite Jaganmohana Palace because of which a number of potholes have been created. I would request authorities to fill these potholes at the earliest,” said Prema Agencies shop owner Prakash.

“Because of KEB repair work, both sides of Lakshmi Vilas Road has been damaged. MLA L. Nagendra has informed us that Rs. 25 lakh has been sanctioned to repair this road. We request authorities to take up this road repair work at the earlier possible,” he added.

Widen these roads: “Half a kilometre stretch from Balamuri Vinayaka Temple in Srirampura 2nd Stage to old Manandavadi Road is not wide enough for travelling safely. Every day, thousands of two-wheeler riders, ambulances and school vehicles travel on this road to reach Vivekanandanagar, Kuvempunagar Bus Depot, Arvindanagar and J.P. Nagar.

Traffic jam on this road is causing a lot of trouble and is taking nearly half-an-hour to clear up. We would request authorities to pay attention and widen this road as early as possible,” said goods vehicle driver Yogish and auto driver Shankar.