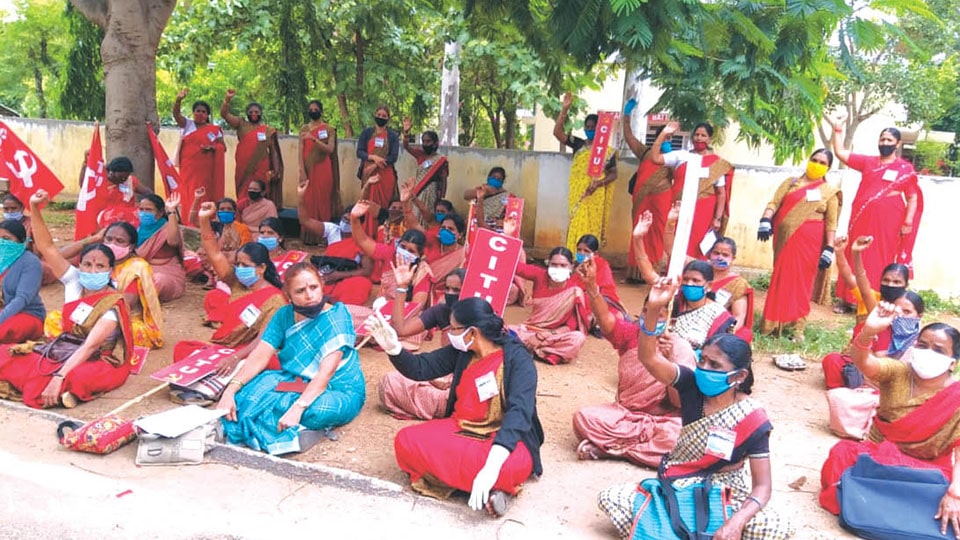 Mysore/Mysuru: Urging the Government to fulfil their various demands and condemning the act of miscreants, who had vandalised the house of Dr. B.R. Ambedkar in Mumbai, Anganwadi workers and Azeez Sait Block Congress SC Committee staged separate protests in city, while ASHA workers submitted memorandums to the heads of all MCC Zones and Gram Panchayats this morning.

In the first protest, Anganwadi Workers, under the banner of Karnataka State Anganwadi Workers Association – CITU from Kadakola Circle, K. Saundi Circle and Doora Circle, as part of their Statewide agitation, staged a protest near the office of the Deputy Commissioner this morning.

The protestors said that they have been working tirelessly since the lockdown period by distributing groceries to the beneficiaries besides creating awareness in rural places during which a few workers were assaulted and alleged that despite them working in COVID-affected places, they were not given safety equipment like face masks, hand gloves and sanitisers, which had resulted in two workers contracting the deadly virus.

The protestors demanded that protective kits be given to them to make their work more effective, to give them honorarium as they are still distributing food kits at COVID-affected places, make them permanent employees and also provide them insurance for Rs. 50 lakh as they too were ‘Corona Warriors.’

The agitators also demanded Rs. 5 lakh be given to Anganwadi workers who had contracted COVID and provide insurance to their family members.

Association President Sunanda, Latha, Kempamani and others were present.

ASHA Workers: ASHA workers, who have been staging protests since a few days seeking fulfilment of their various demands, which chiefly included monthly wages of Rs.12,000, as they are at the frontline in the battle against the pandemic, submitted memorandums to the heads of all Gram Panchayats and to all MCC Zones in city.

Though several representations were made to the Health Department and the Government seeking scrapping of the monthly honorarium system and introduce a monthly wage system wherein every ASHA worker will get minimum wages of Rs. 12,000, their appeals had fallen on deaf ears.

As such, the ASHA workers were forced to stage a State-wide stir seeking fulfilment of their demands which also included distribution of PPE kits and other protective gears such as face shield, face masks, hand gloves and sanitizers, regular testing for COVID-19 symptoms and free treatment to those found COVID-19 positive.

They have warned of intensifying their agitation if their demands were not met soon.