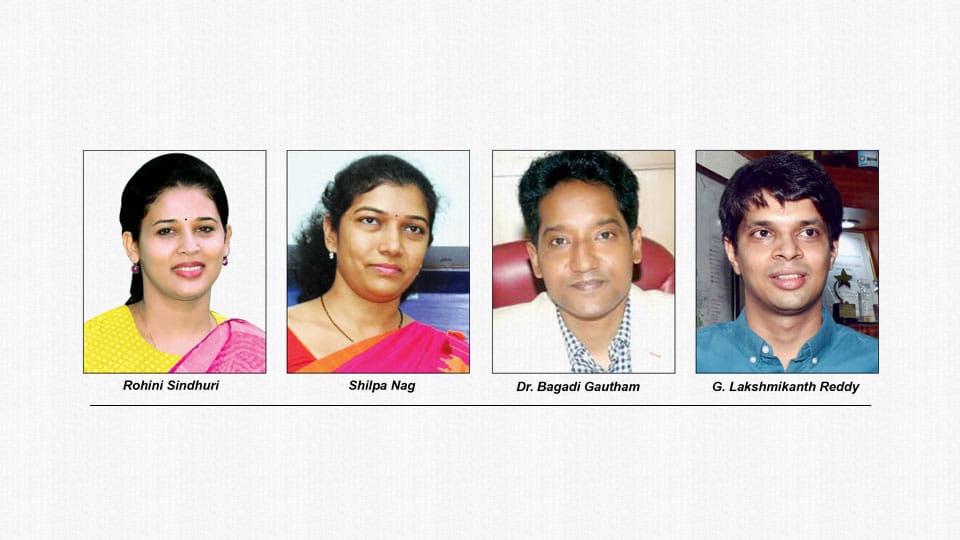 Mysore/Mysuru: In a late-night development yesterday, the State Government transferred two warring IAS Officers — Rohini Sindhuri (Deputy Commissioner) and C.T. Shilpa Nag (Mysuru City Corporation Commissioner) — out of Mysuru, putting an end to their fight that was staged in full public view. The spat had left B.S. Yediyurappa Government red-faced at a time when Mysuru was fighting raging COVID-19 pandemic.

The Government also issued orders to a minor shakeup of the bureaucracy in the State.  The transfer came after three days of war of words and series of media statements between the senior officers that began with the emergency meeting called by Shilpa Nag to announce her decision to quit where she levelled harassment charges against RohiniSindhuri.

The DC retorted by releasing press notes and that too were countered by Shilpa Nag. The statements and counter statements snowballed into major controversy and the Government was criticised for not taking action against the IAS Officer.

Following the spat between the two officers, Karnataka Chief Secretary P. Ravi Kumar had held a meeting in Mysuru on June 4 to take stock of the COVID-19 preparedness of the district, where it was learnt that both IAS Officers had submitted reports justifying their respective positions to him. Shilpa Nag also tried to hand over her resignation to him, but he did not accept it and instead asked her to focus on the COVID-19-related work in Mysuru.

Yesterday, Shilpa Nag had told reporters that she has decided to withdraw her decision of resigning from civil services and would be back to work from Sunday (June 6) “I will start working from Sunday,” she had said. Hours after Shilpa Nag’s statement, the transfer order was issued.

Dr.BagadiGautham, Additional Commissioner for Commercials Taxes for Bengaluru, will replace RohiniSindhuri as the Mysuru DC and Managing Director of Food and Civil Supplies Corporation G. Lakshmikanth Reddy will be the new Mysuru City Corporation Commissioner in place of Shilpa Nag. The transfers came after Chief Secretary P. Ravi Kumar briefed CM Yediyurappa on the fight between Sindhuri and Nag.

While 2009 batch IAS Officer Sindhuri has been appointed as Commissioner for Hindu Religious and Charitable Endowments, a post she had held earlier, 2014 batch IAS Officer Shilpa Nag has been posted as Director (e-Governance) at the Rural Development and Panchayat Raj Department, where she was before her Mysuru assignment.

Apart from Sindhuri and Nag, the order of their transfer also states that Special Health Commissioner P. RajendraCholan has been given additional charge as the Managing Director (MD) of Bangalore Electricity Supply Company Limited (BESCOM), while K.A. Dayananda is now a Commissioner of BBMP Administration.